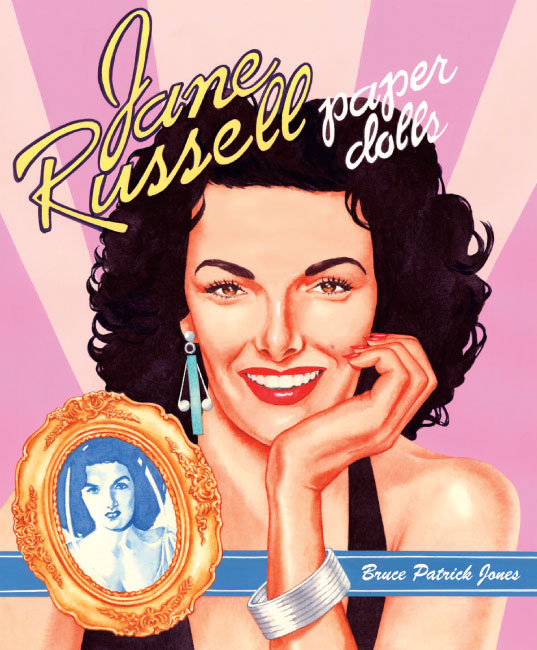 She was a famous Hollywood star for years before the release of her first film, a movie in which she was introduced as a full-fledged cinematic goddess. No wonder. As a gorgeous young part-time model, she was a naturally glamorous Amazon. Her voluptuous, top-heavy curves, 38D-24-36, and her 5’7” height had come to the attention of eccentric millionaire Howard Hughes who put her under personal contract for seven years. An obsessive perfectionist, he created a vehicle that made an instant star of the young unknown. The film was “The Outlaw” and it became notoriously controversial. It was made in 1941, had limited release in 1943 and wide distribution in 1946. Meanwhile, for five years, Jane Russell was the object of a publicity barrage as Hughes battled the censors and finally won.

Although Hughes focused more on the young star’s bosom than her career, the cultural breast fixation of the 1950’s era catapulted her to fame as a sex symbol, a role that never truly fit the wholesome, conservative, religious, do-gooding Republican activist. Although a talented actress, comedian and singer, Jane Russell was never allowed to forget what had made her a star. Bob Hope famously once introduced her as “The two-and-only, Jane Russell!”

Ernestine Jane Geraldine Russell was born in 1921 in a small Minnesota town. She had four brothers and was a rambunctious, feisty tomboy whose mother, a former small-time actress, encouraged her daughter to take piano lessons and go to drama school. When Jane’s father left the military, the family moved to California where the young beauty performed on stage in productions at Van Nuys High School. After graduation she worked as a receptionist and a model. Then, just 20 years of age, she was placed under contract to Hughes and her fame was assured. “The Outlaw” was a film supposedly about Billy the Kid, but it was really Jane Russell’s cleavage that was starred, much to the consternation of the censors at that time. When the film was finally released, it was a smash hit and Jane Russell was the reigning sex symbol of the day (until Marilyn Monroe superseded her). Legend has it that her mentor, an airplane designer as well as a Hollywood mogul, designed a cantilevered bra, underwired to turn her breasts into projectiles. She says she never wore the uncomfortable contraption, simply stuffed tissues in her usual brassiere instead. The famous publicity photo for the unreleased film became a popular pin-up during World War II. It pictured Jane seductively sprawled in hay, the neckline of her blouse loosely falling off one shoulder.

While under contract to him, Howard Hughes insisted Jane’s subsequent films, such as “His Kind of Woman” (1951) and “The Las Vegas Story” (1952) focused on her figure rather than her acting talents. It wasn’t until the end of her seven year contract with him that she and her husband could form their own production company and guide her successful career. The film for which she is best remembered today was “Gentlemen Prefer Blondes” (1953), with brunette Jane cast as Dorothy Shaw, the sardonic comic foil to Monroe’s ditzy blonde. Her salary had risen from $50 a week for “The Outlaw” to $400,000 for “Gentlemen Prefer Blondes.” The rest of the ‘50s saw Jane Russell’s name on the marquee often and her films such as “The French Line” (1954)m “Gentlemen Marry Brunettes” (1955) and “The Revolt of Mamie Stover” (1956) were hits even though they continued to focus on her figure. “Paleface” (1948) and “Son of Paleface” (1952) were box office bonanzas that revealed Russell’s genuinely comedic Calamity Jane wise-cracking to co-star Bob Hope’s hopeless hero. Her leading men were many of Hollywood’s top stars. They included Robert Mitchum, Clark Gable, Victor Mature, Jeff Chandler and surprisingly, Groucho Marx. Jane Russell made 29 films in all, the last in 1970.

With her Hollywood heyday behind her, Jane moved on to the stage, television and continued her life-long interest in music. On Broadway, she starred in the Stephen Sondheim musical, “Company” and she became a familiar face as the perfect TV spokeswoman for Playtex Cross-Your-Heart Bra. She released several recordings over the years, ranging from gospel to torch songs and including a duet with Frank Sinatra.

While she will always be known as a Hollywood Sex Symbol, the real Jane Russell was very different, indeed. Unable to bear children herself, she adopted three and became a dedicated advocate for children’s charities. She vigorously campaigned to get the Federal Orphan Adoption Amendment of 1953 which allowed the adoption of children born overseas who were fathered by American servicemen. In 1981, she testified before Congress and met with President George Bush Sr. A staunch conservative her whole life, Jane was vehement and vocal about her political views and her disapproval of a rebellious society.

She has a star on the Hollywood Walk of Fame and her handprints are in the forecourt of Grauman’s Chinese Theatre. She never came close to winning an Oscar, but Jane Russell will be remembered in movie history as one of the iconic sex symbols of her time, a role that didn’t really suit her true personality, but she played it well.