from Marilyn Monroe Paper Dolls by Marilyn Henry (out of print) 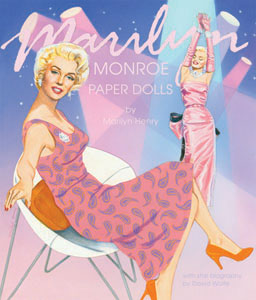 Not many people become myths. World leaders, artists, authors, composers. Napoleon, Van Gogh, Hemingway, Mozart. And one movie star. Marilyn Monroe. Although she died in 1962, the world’s fascination with her continues to grow year after year, decade after decade. Her films are studied as art. She has inspired songs, poems and dozens of books. Her images are iconic. Photographs are reproduced over and over again. Artists have immortalized her. The most famous paintings are Andy Warhol’s pop silk screens. Paper doll artist Marilyn Henry’s lavishly painted book, originally published as a limited edition in 1990, captures Marilyn Monroe at the height of her film career.

The story of her life has been oft told, spin-doctored by studio flacks at the beginning of her career and later seriously studied by scholars and biographers. Hers is truly a classic Cinderella story. Norma Jean Mortenson was born in a charity ward in 1926 and her childhood was sad. Her mother could not care for her and she went in and out of foster homes. She married at 16 so that she would not have to be a ward of the court condemned to live in a Los Angeles orphanage. Then she went to work in a wartime factory and was snapped by a photographer shooting a story for “Yank” magazine. That photo led to a successful career as a pin-up model which in turn led to a screen test in 1946.

Marilyn Monroe did not become a star overnight. After a false start, she was dropped by 20th Century Fox and Columbia. M-G-M passed on her and she eventually re-signed with 20th Century Fox. Bit parts in some B-movies did little to bring her attention as she improved herself with blonde hair, dental work and some minor plastic surgery. Better roles, still small, started to get her noticed in “All About Eve,” “Asphalt Jungle” and “Monkey Business.” She got a break in “Clash By Night” when she portrayed a psychotic baby-sitter.

Meanwhile, movie fan magazines were building Marilyn’s fame and by the time she played a scheming wife in 1953’s “Niagara” she was a star. That same year, her career nearly got derailed when the premiere issue of Hugh Hefner’s “Playboy” magazine featured a nude shot of Marilyn taken years earlier when she was a model. She made light of it when she declared that she was only wearing Chanel Number 5 perfume. Her fans loved it.

The biggest hits of her career followed one after the other. “Gentlemen Prefer Blondes” with Jane Russell,“How to Marry a Millionaire” with Betty Grable and Lauren Bacall and “The Seven Year Itch” cemented Marilyn’s success. The photo of her standing on a subway grating with the skirt of her white dress blowing up is positively ubiquitous. Because she felt she was being type-cast as a dumb blonde, Marilyn broke her contract and fled to New York City to study at the Actor’s Studio and become a more serious actress. She fulfilled that ambition when she returned to Hollywood with a new contract and starred as Cherie, the hillbilly chanteuse in “Bus Stop.” More prestigious, but far less successful, was “The Prince and the Showgirl” co-starring Sir Lawrence Olivier and made by Marilyn’s own production company. In 1959, she won a Golden Globe when she scored a triumph in Billy Wilder’s“Some Like It Hot” with Jack Lemmon and Tony Curtis in hilarious drag as flappers. “The Misfits” was a serious drama written expressly for Marilyn by her third husband, famed playwright Arthur Miller. It tragically turned out to be Clark Gable’s last film. Her final film, “Let’s Make Love,”was a dud.

Marilyn Monroe’s private life was always matter of public record and intense media scrutiny. Her second marriage to famed baseball player, “Yankee Clipper” Joe Dimaggio, was undermined by Marilyn’s growing fame as a sex symbol. Fragile health and emotional problems dogged her and were reported in detail. Plagued by insecurity, her work suffered and she became notorious for being late, unprepared and unstable. As the years went by, Marilyn’s life seemed to unravel and after the failure of her third marriage, she became involved with President John F. Kennedy. In 1962, she made headlines when she sang “Happy Birthday, Mr. President” at a big celebration party. The flesh colored beaded gown by Jean-Louis she wore that night was auctioned for $1,267,500 in 1999.

By 1962, Marilyn Monroe’s career was in trouble. “Something’s Got to Give” was in production and the star hardly ever turned-up to work. But when she did turn up, she looked incredibly beautiful; slender and almost ethereal. Top fashion photographer Bert Stern shot her for “Vogue” magazine and went on to shoot a series of beautiful semi-nude pictures known now as “The Last Sitting.” On August 5, 1962, the world’s most famous sex symbol was found dead in her Brentwood home, the victim of an overdose of medication.

Although she died many decades ago and made just over thirty movies, Marilyn Monroe is more famous today than when her career was at its peak. She was named the sixth greatest female star of all time in the American Film Institute’s list of 100. Her images are everywhere. Photographs, books and paintings keep her in the public eye. Her name is licensed to sell wine, jewelry, paper dolls and other merchandise. She represents the very image of Hollywood and her life story seems now to symbolize the futility as well as the glory of celebrity and fame.