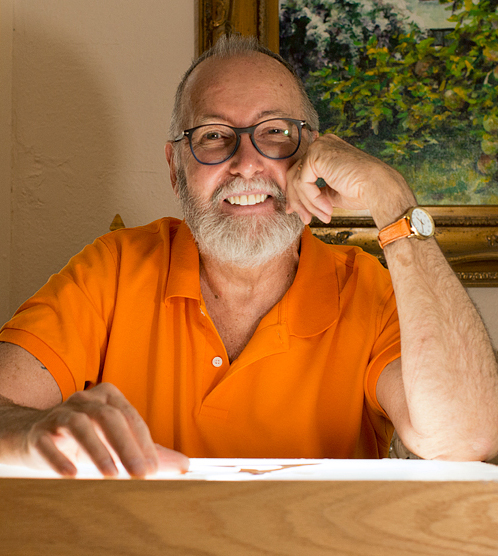 Not only do I love collecting and creating paper dolls, but I feel that I owe them a debt of gratitude. If it hadn't been for paper dolls I would never have had the exciting career in fashion that I've enjoyed for more than fifty years. Even more importantly, I would never have learned to use my imagination to escape a dreary childhood into a glamorous world where lovely paper dolls wore the most beautiful clothes. Of course those clothes were just paper, but they were more wonderful to me than any of the Paris haute couture creations I became accustomed to seeing during my years in the fashion business.

It is a long way from Ohio to London, Paris, Milan and Florence-the cities where I lived and worked as a fashion illustrator and journalist before becoming a fashion trend analyst based in New York City.

As a kid growing up in a semi-rural suburban setting on the shore of Lake Erie, I was quiet, introverted and shy. I preferred reading and drawing to playing baseball or riding a bike. My very favorite pastime was going to the movies. I liked the Technicolor musicals best and would come home and draw the costumes. I was not ever the typical boy next door! My parents told me that my first spoken words were, “Betty Dray-bill.” I don’t think they were joking!

My cousin Lois, now deceased, was eight years older than I. When my family visited hers I was allowed to play with her collection of paper dolls. The difference in our ages meant that her collection was already vintage by the time I got my hands on it. How I loved her 1940's sets of Ziegfeld Girl and Greer Garson.

I inherited her paper dolls and coloring books when she outgrew her interest in them and added my own purchases, of course. My favorites were of Esther Williams and Betty Grable, both stars the subject of paper doll books in the 1950s that are, in my opinion, the most beautiful ever produced.

Little did anybody realize at the time that while I was playing with my paper dolls, I was training my eye for fashion at an early age. Paper dolls in those days used to have very extensive wardrobes and lots of accessories. It was fun for me to experiment with different looks . . . mixing up blouses and jackets and skirts and gowns with different wraps, bags, hats and gloves. I'm sorry that most of the paper dolls created by artists today don't offer the same opportunity for playing fashion coordinator.

Of course, I eventually outgrew my paper dolls (or so I thought, at the time!). I went to work at a local department store and became a fashion illustrator as well as a fashion coordinator. I drew illustrations for the ads and put together fashion shows. I was well aware that I had simply traded my paper doll clothes for clothes made of cloth, and life size flesh-and-blood models replaced my little paper movie stars.

I married an English girl who happened to be living in my Ohio hometown because she had fallen off an elephant when the circus she was in came to town. The circus moved on and she stayed. After a few years, with our three daughters, we took a vacation to Europe. In those days-late in the 1960s-that was an adventurous journey in a prop jet with several stops for refueling. I fell in love with London immediately. It really did swing then! It was the hey-day of the mini-skirt and Beatlemania, and there I was in the epicenter of Mod style. While on vacation I was offered a golden opportunity-an assignment to go to Paris and sketch Emanuel Ungaro's new collection for a series of advertisements that would appear in British Vogue. I had to keep pinching myself as I sat on a little gold chair in a posh fashion salon chatting with the famous designer himself while I sketched his creations. As the old song goes - "How ya’ gonna keep them down on the farm after they've seen Paree?" I never went back to Ohio.

For the next fifteen years, I lived in a fashion whirl, constantly traveling from my London home to Paris, Milan, Florence, New York and Los Angeles. There were interesting trips to Japan, India and Africa, too. My fashion illustrations appeared in Vogue, Women's Wear Daily and The London Times. I did advertising campaigns for many of the top stores in London and Paris including Selfridges, Liberty of London and Galleries Lafayette.

After a few years, I grew frustrated and felt limited being just an illustrator. I wanted to do more, be more involved in how fashion happens. In the early 1970s, American stores and manufacturers were hungry for new ideas from Europe and some little consultancies came into being to service that need. I became creative director of one such fashion service company where I wrote reviews of fashion shows and designed collections that forecasted in-coming trends. That led to free-lance fashion editing and journalism. My multi-faceted career gave me the chance to interview many famous designers like Calvin Klein, Donna Karan and Karl Lagerfeld. Gianni Versace once made a special suit for me and Giorgio Armani asked me to model an outfit for U'omo Vogue. The time I interviewed Hollywood legend Edith Head in the Paramount Studio Commissary over lunch is an experience I shall never forget!

I returned to America in 1981 (divorced and gay) and continued my career as a trend forecaster and analyst, working for the world's largest fashion consultancy, The Doneger Group. Most of my time is taken by personal presentations and lectures, doing TV and newspaper interviews as spokesperson for the company.

Rediscovering paper dolls and finding an entire community of collectors was an important and delightful experience for me. Just for fun, I was helping a friend design clothes for a fashion doll. I created an imaginary persona for the designer and called him "Jerrold de Wolfe." When I wrote his fictional autobiography for my friend's website, I imagined two glamorous sisters for the designer. On a whim, I decided it would be fun to produce a set of paper dolls based on the characters I'd created. How I struggled to come up with a style of painting that satisfied me! I wanted my work to look like the paper dolls I remembered playing with as a child, very richly rendered, lushly colored and extravagantly detailed.

It took months and many rejected attempts before I was happy with results. I did page after page of clothes and accessories, produced a limited edition and put them all into an artist's portfolio. That was so much fun, I produced another portfolio, "Homage to Hollywood" consisting of a dozen vintage stars, each with an outfit I designed myself. For the past several years, I've made paper doll Christmas cards to send to my friends. My career keeps me too busy to work on paper dolls as much as I'd like to.

When I learned of the annual Convention, I couldn’t wait to attend the up-coming one where I met Jenny Taliadoros, a life-changing experience. She and I hit it off like life-long friends. We not only shared a passionate interest in paper dolls, but we also shared the same sense of humor. Jenny was just beginning to build her business, Paper Studio Press and I was thrilled that she was going to start publishing work by contemporary artists. My first creation published by Paper Studio Press was a paper doll book devoted to TV Moms of the '50s, with four dolls who resemble Donna Reed, Harriet Nelson, Barbara Billingsley and Jane Wyatt. Dozens of books followed over the years. They include licensed celebrity paper dolls of Marlene Dietrich, Ava Gardner, Donna Reed, Marsha Hunt, Veronia Lake, Carol Channing, Patti Page, Debbie Reynolds, Phyllis McGuire and Doris Day. A special anniversary paper doll celebrated the film, "Grease." Fashion paper dolls books include Hollywood Style of the '30s, '40s and '50s plus Hollywood Style of the '60s, '70s and '80s. Another book was devoted to Polka Dots, and another to Hollywood Confections. My "History of Hollywood Fashions" series pays tribute to the stars and costume designers of the Golden Era of Film including Greta Garbo, Better Davis, Joan Crawford and many more.. Each book in the series represents six classic stars and ten pages of film costume plus authoritative commentary. There is always a new book or two of paper dolls on the drawing board, awaiting publication by Paper Studio Press.

Retirement is still a couple of years off, but once that happens, I intend to spend many a happy day painting new paper dolls when I'm not writing a novel visiting my children. Two daughters and my son live in Florida while my other daughter returned to the states after spending most of her life in London and Paris. She teaches fashion history at LIM College in New York City and she has a wonderful series of videos online (Visit amandahallay.com) My time is divided between Manhattan and an apartment that is the top floor of a 1883 carriage house in the charming Long Island village of Sea Cliff. I share my life with my husband, Francisco.

I'm happily reliving my childhood by re-collecting the same paper dolls I loved so much all those years ago. My collection, housed in a big wallk-in closet, contains every single paper doll from my past - Greer Garson, Betty Grable, Esther Williams, Bette Davis, Hedy Lamarr, Doris Day, June Allyson as well as the entire cast of Ziegfeld Girls and Gone With the Wind. The best part of renewing my passion for paper dolls is the discovery that I am not alone. Through the wonderful OPDAG publication and Paperdoll Review magazine, I am getting to know about so many talented artists and collectors. It's a thrill for me to be able to contribute my efforts to both publications..