Confessions of a Red Carpetbagger
DAVID WOLFE interviews his friend MICHAEL QUINTANILLA, an award winning journalist who covered the Red Carpet for the LA Times.

From Paper Doll Studio Magazine Issue 86, Summer 2006 (out of print) 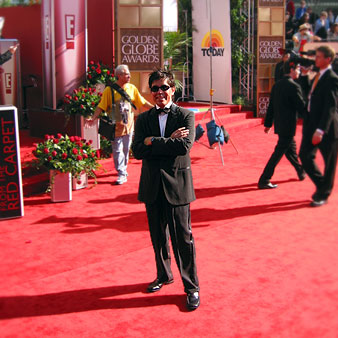 DW: How many Red Carpets did you cover?

MQ: Five years worth! The Oscars, the Emmy’s, the Golden Globes, the Latin Music Awards and whenever they were held in Los Angeles, the Grammy’s and the MTV awards.

DW: You’ve interviewed so many stars. Let’s cut to the chase. Who was the best looking?

MQ: Halle Berry, in that purple Elie Saab gown the year she won for “Monster’s Ball.”

MQ: No contest! George Clooney. I was speechless when we met. Couldn’t say a word. And I’m never speechless.

DW: And the meanest?

MQ: The stars are all nice, at least on the Red Carpet. It’s their handlers and PR people and their stylists and their life coaches that tag along with them who can be uncooperative.

MQ: Each star is maneuvered down the Red Carpet and every reporter and TV interviewer wants to talk to them, of course. The handlers precede them a yard or so and guide them to the important people and right past the ones they decide are not so important.

DW: So who’s important then? You?

MQ: Well, the paper I worked for then, the LA Times, is the hometown paper for Hollywood, so I always got to talk to everybody. But even so, it’s not easy. The handlers rush up and say, “She’s coming!” And then you’ve got maybe 30 seconds to get a good quote out them before they get herded on.

DW: Why such a little bit of time?

MQ: All the mega-stars show up at once, like a celebrity rush hour. Even though all the media people, like, have to be in their assigned place by 2:00 at the latest, and that means no bathroom breaks. Yes, there are porta-potties by the Red Carpet. And standing so long is hard.. Lots of the women reporters, who all have to wear evening gowns by the way, are wearing flip-flops that you can’t see. The men all have to wear tuxedos, it’s the rule. Mine is Prada and I bought it just for the Oscars. So we’re there, all dressed up, standing there for hours and sweating because it’s always a hot, sunny afternoon. The stars all finally arrive in the half-hour before the show starts at 5:00. Then there’s a pattern, they all do it the same way.

DW: What do you mean?

MQ: First stop, right out of the limo is “Entertainment Tonight: Then comes “Access Hollywood.” Next , they go to Army Archer of “Variety.” He’s on a little platform and does a short interview, then introduces the stars to the audience in the bleachers. They sign a few autographs, pose for a couple of pictures and move on to the “Today” show and then everybody talks to Joan Rivers.

DW: And where were you?

MQ: Usually right next to Joan. She’s always been very friendly with me. And she’s so funny. Like, she’ll tell somebody they look fabulous and their gown is gorgeous,and then she’ll make somefunnycomment about them when they’re out of earshot. I think that some celebrities are afraid of her but when they're in front of her, theywarm up. I know I did.

DW: You mentioned assigned spots. Can’t a reporter stand wherever he wants?

MQ: No way! The spots are strictly assigned. They’re about as big as a paper plate, and you aren’t allowed to move from them. The organizers hold a sort of lottery to assign the best spots and one year I had the very best spot, right in front of the door to the reception area. By the time the stars get there, they’ve run the Red Carpet gauntlet, talked to the electronic and print media and they’re ready for a drink, a smoke, a gossip and lots of air kissing. They’re feeling relaxed. The spot I had is the best because the stars have time to talk and their handlers aren’t pushing them on to the next interview.

DW: Do you remember anything special about that time?

MQ: Yes! I remember talking to Warren Beatty andAnnette Bening when my cell phone in my pocket rang. It kept ringing and I knew it was my editor, so I had to answer it. I told her who I was talking to and then Warren, who’s a notorious jokester, grabbed the phone and told her I was doing a great job and deserved a raise!

DW: That’s the time you took all those pictures yourself, isn’t it?

MQ: Yeah, it was so cool! When the paper found out I had been assigned the prime spot they told me I had to take a camera because my spot was better than the place where our photographer had to stand. I’d never used a professional camera in my life and they gave me a two minute lesson and told me to point and shoot, so that’s what I did.

DW: Those pictures turned out great, didn’t they?

MQ: I got a really cool shot of Helen Hunt. I saw her just standing there and I shouted, “Hey, Helen!” She turned towards me. “Do something, girlfriend!” I yelled. Suddenly, she hiked a knee under her gown and pounded a fist into the air. I snapped. “I hope you got the shot,” she said. I did. The next day it was the biggest picture in the paper, a Red Carpet moment that, for me, felt more like a magic carpet ride. Another shot was a real surprise to me. The art director called me into the photo lab to congratulate me on a close-up I’d got of J-lo with a giant, 20-foot tall Oscar statue perfectly positioned behind her. When he pointed that out, I said, “What Oscar?” I hadn’t even noticed it when I snapped the shutter. It was real beginner’s luck. And then there was the time that Matt Damon handed me his own disposable camera so I could snap him with Ben Affleck.

DW: Anybody been funny?

MQ: Surprisingly, Russell Crowe. He’s not exactly known for being friendly with reporters. When he was up for “Gladiator,” I asked him if he had a good luck charm. He pulled several from his Armani pockets, including a thimble-sized rubber ducky. That wasn’t all. “I’m not wearing underwear for good luck,” he confessed.

MQ: That’s what one billion viewers tune in to see, isn’t it? It all boils down to the gowns.

DW: Any that stand-out in your memory?

MQ: Jennifer Lopez always impresses me. Once she told me that the strapless black Badgley Mishka gown was wearing meant that she couldn’t sit down or eat a thing all night because she’d been sewn into it. And that daring green print Versace she wore once. That one was engineered to stay put by anchoring it to her panties and using doublestick tape everywhere! One of my favorite gowns was a lemon chiffon by Bradley Bayou.

DW: Who wore that?

MQ: I’ll never forget Bjork waddling by me in that ridiculous swan song of a dress. I prefer calling a bird a bird and this was one ugly duckling, a ruffled tutu complete with a stuffed billed head. “What were you thinking?” I politely asked. She pretended she didn’t understand and muttered something Icelandic, I think, probably along the lines of giving me the bird.

DW: Even though you are no longer with the LA Times, but now write for the San Antonio Express-news, you still write about the Red Carpet, don’t you?

MQ: Yes. It’s big news everywhere. Of course, a Red Carpet reporter’s not going to get the journalistic scoop of the century. That is, unless you’re investigating daring décolletage.

DW: So what did you like best about this year’s Oscar fashion fest?

MQ: The fashion statement of the evening had to beKeira Knightley who stood out in an eggplant taffeta, trumpet-shaped gown, structured and not drippy like so many others. Her hair in a high ponytail looked natural and her smoky eyes were sexy. And unlike other actresses, she wore chunky jewels by Asprey, the famous English jeweler.

DW: You obviously love the Red Carpet, don’t you?

MQ: Hey, it’s a big party! It’s the only time celebrities are all there together, all there with the media, not fighting them. Everybody’s having fun.

DW: Thanks for sharing your Red Carpet confessions with Paper Doll Studio, Michael Quintanilla. Next year, in 2007, the Paper Doll Convention is going to be held in your hometown of San Antonio.

MQ: I’ll be there! Sounds like it could be a great story for my newspaper!