Article from Paperdoll Review magazine issue 34, 2005 (out of print) 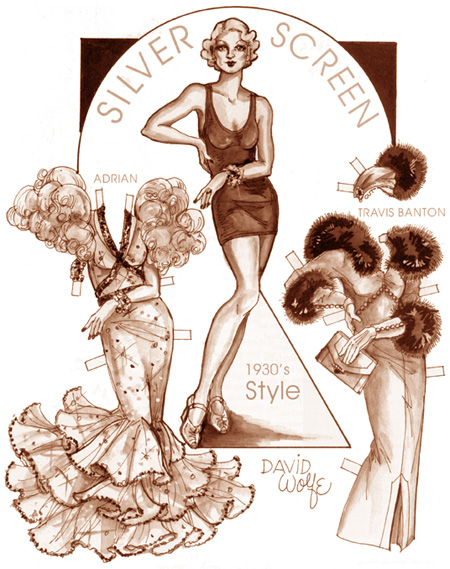 Hollywood in the 1930s was the world’s dream factory. It was a time when the world needed dreams. The Great Depression held America’s economy in a death grip. In Europe war clouds darkened the horizon. Who wouldn’t want to escape into a beautiful dram world? Every week millions of movie goes sat in the dark and were swept into a dreamland where romance and music beguiled, where homes looked like nightclubs and nightclubs looked like palaces, where men were suave and charming and where women were all dream girls.

Although there were many designers employed by the studios during the’30s, a trio of talents soar above all the others. Adrian, Travis Banton and Orry-Kelly are responsible for some of the most breathtaking clothes to ever appear on the silver screen. Their work has come to define Hollywood glamour. No wonder. Who can forget the fashion fantasies they created? Garbo in Adrian’s cloud of star-spangled tulled in “Camille.” Dietrich swathed in Travis Banton’s black coq feathers and veiling in“Shanghai Express.” A vast tapping chorus in Orry-Kelly’s black and white positive/negatives in “42nd Street.”

The three designers had much in common both professionally and personally. They each came to Hollywood via parallel paths, beginning on Broadway. All three were gay, though Adrian and Banton married (Adrian to actress Janet Gaynor), probably for the sake of propriety.

Adrian was born Gilbert Adrian Rosenberg in Connecticut in 1903 and his career began on Broadway when Irving Berlin noticed an outfit he had designed for a costume ball. His first movie costumes were for Rudolph Valentino and he worked for Cecil B. Demille before stepping into the star job at MGM where he reigned until 1942. It was his work at that studio that made him a legend.

One of his most famous creations, a ruffled gown for Joan Crawford in “Letty Lynton,” is supposed to have sold 500,000 copies at Macy’s (a claim that certainly was grossly exaggerated!). He gets credit for giving Crawford those famous shoulder pads to reproportion her stocky silhouette. Adrian expertly executed bias cutting, popularizing the silhouette so clinging that Harlow couldn’t wear any underwear. With so many movies in production all the time, Adrian sometimes goofed. Delores del Rio claimed that whenever he made a mistake he’d just cover it with a big bow!

Most of Adrian’s movies were black and white and he took advantage of the medium by employing high contrast combinations that at first caused trouble in filming. He favored bold stripes and face-framing white collars for black outfits. However, when he used color, he did it with incredible flair in “The Wizard of Oz” and what is possibly the best fashion show segment ever captured on film in“The Women.”

Historical accuracy was not a strong point with Adrian who would always sacrifice authenticity for glamour. The real Marie Antoinette never had a wardrobe like the French confections he whipped up for Norma Shearer. Adrian created those frothy fantasies Jeanette MacDonald wore in so many of her singing roles, such as “Naughty Marietta.” The Merrill paper doll book features many of his designs.

When Garbo retired Adrian lost heart and also left MGM, but his career was far from over. He opened a solon in Hollywood and continued to dress many stars for their private lives. Adrian, probably the most famous and influential of Hollywood designers never won an Academy Award for the simple reason that he retired before they began to be awarded for costume design.

Travis Banton was born in 1894 in Waco, Texas, an unlikely starting point for the designer of the most glamorous and sophisticated clothes ever to grace the silver screen. He began as a high society dressmaker and first won fame when he designed Mary Pickford’s wedding gown. From there, he went to the Ziegfeld Follies and in 1924, Hollywood beckoned. He worked a Paramount, Fox and Universal. He career began in the days of silent movies, but it was the ‘30s when he made his mark on fashion.

Marlene Dietrich’s career was due as much to Banton as to her mentor/director, Josef Von Sternberg. Her image of mysterious, deluxe glamour that endures to this day is the result of Banton’s imagination. Iconic images of Marlene include Banton’s wind-blown chiffons, miles of red fox, a treasure trove of jewels, fantastic feathers and veils. The costumes for “The Scarlet Empress” are surely some of the most non-authentic ever created and some of the most unforgettable.

His focus was on fabric and he used it craftily to crate very streamlined styles. He even managed to make Mae West look sleek! Carole Lombard and Claudette Colbert got the Banton treatment in their films, too. His designs for them were closer to reality, somewhat simpler but still stellar.

Orry-Kelly was John Kelly from Australia, a rowdy heavy drinker who was nothing like the cliché image of effete dress designer. He wanted to be an actor so he pursued his dream by going to New York where he shared an apartment with another aspiring actor named Archie Leach. Archie of course became Cary Grant and John Kelly became Orry-Kelly (Orry was his middle name) when he moved to Hollywood in 1932.

His eleven year tenure at Warner Brothers meant he was responsible for costuming Busby Berkeley’s crazed extravaganzas as well as more dramatic fare. He was good at “reality” as he saw it...street looks for molls and dames...which helped him fit in well at Warner’s. Bette Davis relied on him to create costumes that defined her characters and she called him her “right hand.” He glamorized her for “Fashions of 1934” and dressed her famously for “Jezebel” in the scandalous red grown that had to be brown in a black-and-white movie, since red photographed black. And he did the wonderful make-over for Davis in “Now, Voyager.” Later in his career he won Oscars for “Some Like it Hot,” “Gypsy” and “Les Girls.”

Adrian, Travis Banton and Orry-Kelly exemplified the stuff of dream fashion but there were other notable designers who contributed to Hollywood’s golden decade. Howard Greer, Robert Kallock, Irene, Walter Plunkett and Dolly Tree were among the talents employed by the sudios. Walter Plunkett will be best remembered for 1939’s “Gone With the Wind,” the pinnacle achievement of a career specializing in historic costume. During the ‘30s, Edith Head was only an assistant to head designers, however she made her mark with some interesting creations including Dorothy Lamour’s sarongs. She came into her own in the ‘40s and racked up a record of Academy Awards and a staggering total of 500 movie credits.

Vera West did many of Deanna Durbin’s costumes and some for Dietrich as well, as in “Destry Rides Again.”Milo Anderson did some of Warner’s more glittery films, specializing in all –out glamour. Raynor and Gwen Wakeling also did some outstanding work

Trends come and go, and occasionally even the best designers borrowed from each other, at least enough to be in fashion. If Adrian was using dotted Swiss and lace, others would follow. Surprising how often dresses showed up more than once in more than one film. There it was, hanging there in the wardrobe department and why not change a button here or a bow there and make use of it? Sometimes they didn’t even bother to change anything. A suit designed for Lana Turner in “Slightly Dangerous”turned up intact on an extra in “Keep Your Powder Dry.”Plunkett designed the original costumes for “Flying Down to Rio” and when he was working on “The Gay Divorcee,”he used his Rio pajamas for Betty Grable’s dance number with Edward Everett Horton.

The glamour of Hollywood in the ‘30s continues to inspire fashion designers to this very day. More and more books are being published about the period and the designers who defined it. “Gowns by Adrian” and“Costume Design in the Movies” are available on Amazon.com. Both Tom Tierney’s and Marilyn Henry’s carefully researched and meticulously rendered paper doll books include fashion from ‘30s Hollywood. Vintage paper doll collectors may not be aware that the books published in the ‘30s offer a wealth of fashion inspired by the talented triumvirate of Adrian, Travis Banton and Orry-Kelly.

The fashion drams executed by Hollywood in the’30s may not have come true, but they still enchant and inspire today via TV, VHS and DVD.