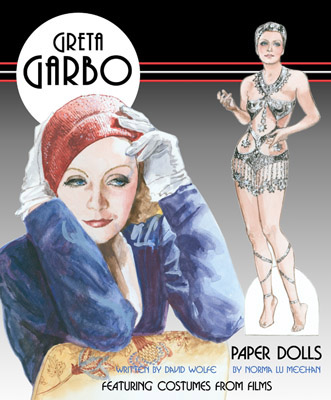 Garbo! That one word, the name that launched millions of cinematic dreams, conjures an enduring image of magnetism and mystery. She is widely acknowledged as the most beautiful woman of the 20th century, perhaps of all time. Her face became the unquestioned template of perfection, but Greta Garbo was more than beautiful.

She was an actress of sublime sensitivity and her major films survive as testaments to her talent. Queen Christina (1933), Anna Karenina (1935) and Camille (1936) are more than great classic movies because Garbo’s beauty and talent illuminated them, elevated them into true works of art.

Garbo also served as a role model for women of that era, representing a ‘modern woman’ who embodied a feminine confidence, in a role more equal to men than had been previously acceptable.

When she died in 1990 at the age of 85, Greta Garbo had not been seen on the screen for almost half a century but she was never forgotten. To the end of her life, she was pursued by the media much to her great consternation. She is supposed to have said “I want to be alone” but she actually just wanted to be left alone. There is a difference. Garbo never bought into the star system although she is very possibly the greatest star ever.

Greta Lovisa Gustafson was born in Stockholm, Sweden, in 1905, the third child in a family that struggled along. After the death of her father when she was fourteen, she went to work in the millinery department of a big department store in Stockholm. Already focused on a career in acting, she was chosen to appear in a few short advertising films within months of starting her job. She eventually quit her job for her first film role in the summer of 1922.

Garbo was awarded a scholarship to the prestigious Royal Dramatic Theatre Academy that fall. While there, she attracted the attention of the Swedish drama community with her work in a number of plays. By her second school year she was generating excellent reviews as a supporting actress at the Royal Dramatic Theatre. An important director, Mauritz Stiller, cast her as the lead in the Swedish epic, The Atonement of Gosta Berling (1924). Stiller mentored her early career and the two were involved in an on again, off again romance until Stiller’s death in 1928. Stiller arranged for Garbo’s casting in a leading role in the German film, The Joyless Street (1925).

Louis B. Mayer, head of MGM, was in Europe talent scouting and he signed both Stiller and Garbo to Hollywood contracts. Garbo achieved instant stardom in silent films such as The Temptress (1926), Love (1927), and The Kiss (1929). Silent movie idol John Gilbert was her co-star in Flesh and the Devil (1926). Their passionate love scenes ignited an off-screen romance that enthralled fans.

Garbo became a box-office sensation. When talkies came in, Garbo’s deep, throaty voice perfectly suited her image and to publicize Anna Christie (1930), MGM trumpeted the news “Garbo Talks!” She spoke on the screen but stopped talking to the press and so began the legend of her mystery as a private individual, inspiring endless curiosity and speculation. Her extraordinary looks, those expressive, long-lashed eyes, her arched bows and silky fine hair, influenced not only moviegoers, but other stars such as Joan Crawford and Carole Lombard. Perhaps her looks could be emulated, but not her acting. On screen in films like Grand Hotel (1932), Mata Hari (1931) and The Painted Veil (1934), she seemed world-weary yet charged with intense emotional angst that she could convey with the most subtle shift of expression.

With World War II in Europe threatening that market for American movies, MGM tried to reinvent its top star, to make her less Continental, to play down her mysterious allure. “Garbo Laughs!” advertised the comedy hit Ninotchka (1939) in which she played a dour Communist who succumbs to Paris and to love. Audiences loved the new Garbo, flocking to see the film.

However, the next film was a disaster for the studio. Two-Faced Woman (1941), a racy comedy with Garbo in a dual role as twins, was condemned by the Catholic Legion of Decency and pulled from distribution until censorship issues were resolved. Garbo had always selected vehicles that pushed the boundaries of film censorship and she had always been granted privileged rights to make movies no one else would have been allowed to film in her era. The censorship of Two-Faced Woman reflected the growing power of the social conservative movement and led directly to less provocative films from that point until the 1960s. It was to be Greta Garbo’s final screen appearance. She simply left Hollywood, never to return.

The remainder of Garbo’s life was spent in New York City where she could often be spotted taking long walks or wandering through art galleries and antique shops on the Upper East Side. Garbo actively considered film projects through the mid-sixties, and rumors of a comeback bubbled up repeatedly. Curiosity about possible relationships continued to fascinate the public. Her known or suspected liaisons included John Gilbert, Rouben Mamoulian, Leopold Stokowski, Cecil Beaton and George Brent.

The mystique lives on and on. Her films, both silent and talkies, are studied by serious students of the cinema and revered by audiences everywhere. She truly was unique, a public figure who shunned publicity, one of the greatest beauties of all time and a supremely talented artist. Her gift transcended her art form. Even in still photos, her face is compelling, fascinating. The final scene in Queen Christina is considered iconic. Gazing ahead to an unfathomable future, her face is unforgettable.

She was far more than a movie star... she was Garbo.