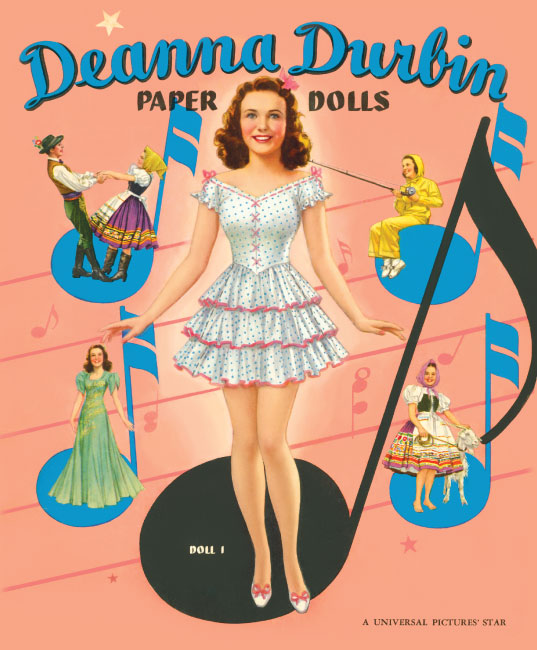 Deanna Durbin was credited with saving Universal Studios from financial ruin when, as an adorable adolescent, she sang her way to stardom. Her very first movie, Three Smart Girls, jump started her short, but sensational career, and she was presented with a special juvenile Academy Award when she was fifteen years old. In a career spanning only thirteen short years, she made twenty-two films plus a couple of short subjects and then she retired from the screen and public life. Yet even today, Deanna Durbin occupies a unique place in Hollywood history as an immensely popular presence.

Edna Mae Durbin was born in Canada in 1921 and her family moved to California shortly after her birth. She was gifted with a precocious singing voice and began training her remarkable talent at an early age. By the time she was 14, she had impressive technical skill and the vocal range of a legitimate lyric soprano as well as a new first name. She was signed by MGM and quickly put into a light little short subject, Every Sunday. Her operatic virtuosity was featured in contrast to another young contract player who sang swing style-Judy Garland.

There have been rumors that the talent scout misunderstood L.B. Mayer's instructions when he signed Judy and let Deanna's option drop and Mayer was not pleased. But before the mistake could be rectified, and before young Deanna could blink, Universal Studios had offered a contract. A disgruntled Mayer swore to make a bigger star of Judy than Deanna would ever be.

Averaging two hit movies a year after 1937's smash One Hundred Men and a Girl, Deanna Durbin became one of the world's most popular stars. Her sweet, yet strong voice allowed her to perform everything from popular standards to operatic arias. But it was her sparkling personality that endeared her to fans, young and old. Hit followed hit. Made About Music, First Love, Spring Parade, His Butler's Sister, Can't Help Singing, Up in Central Park, and scores of others.

Unlike some youngsters, Deanna Durbin effortlessly grew up in the movies without losing any of her charm. Audiences loved watching the wholesome star go on her first date and get her first kiss from Robert Stack, all the while handling light comedy and always warbling with that angelic voice. There were several other young soprano stars such as Kathryn Grayson and Jane Powell, but none ever equaled the unparalleled popularity of Deanna Durbin. Her devoted young fans bought dolls, clothes and other merchandise bearing her name and likeness. The paper doll books produced in the early 1940s follow Deanna Durbin's career from adolescence through young womanhood. This 1941 reproduction portrays the star as a lovely young lady, and shows many costumes from Spring Parade, as well as It's a Date, Nice Girl? and That Certain Age.

After a dozen years as a top star, Deanna Durbin retired. She had tried to play more sophisticated roles in Christmas Holiday and Lady on a Train, a whodunit, but her audiences wanted her to remain their young singing sweetheart. She was married three times. With her third husband, director Charles David, she moved to France in 1950 and turned her on back on show business for good.

Deanna Durbin may be gone from the scene, but her delightfully natural performances are not forgotten and she remains a special star in the history of Hollywood musicals.