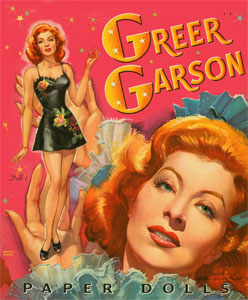 No other star can claim her movie was recommended by both a President and Prime Minister. Greer Garson had that considerable honor when Franklin Delano Roosevelt and Winston Churchill both stated that “Mrs. Miniver,” the 1942 film was good for wartime public morale. The role of Kay Miniver, the beautiful and brave, stout-hearted heroine won Greer Garson the Academy Award for Best Actress. She was nominated a further six times in her career, the last time in 1960 for her portrayal of Eleanor Roosevelt in “Sunrise at Campobello.”

Born in London in 1904, Eileen Evelyn Greer Garson spent much of her childhood with her grandparents in Ireland (and later she claimed to have been born there, four years after her actual birth date). She was well educated and earned college degrees in French and 18th Century Literature. Trained to be a teacher, instead she went worked in an advertising agency while nurturing interest in the theatre. She quit her job to join a rep company, shortened her name to Greer (her mother’s maiden name) Garson and achieved a modicum of success on the stage. She starred in a very early TV production of “A Midsummer Night’s Dream” in 1936. When Louis B. Mayer of M-G-M came talent scouting in London, he saw a beautiful red-head playing opposite Lawrence Olivier in “The Golden Arrow” and quickly signed her to a seven year Hollywood contract.

Greer Garson’s rise to movie stardom was stalled when she arrived in tinseltown. She refused to play supporting roles and, already in her thirties, she was deemed difficult to cast. Finally, in 1939 she was given a role opposite Robert Donat in “Goodbye, Mr. Chips.” It not only brought her attention, but also her first Academy Award nomination. Next came a supposedly frothy comedy, “Remember?” that is forgettable except keen viewers can see M-G-M’s make-up department restyling the actress from a plucked-brow ‘30s look into the regal, lady-like beauty that was to become her image. It is that image so beautifully captured in this reprint of the artful paper doll book originally published in 1944, complete with eight pages of costumes from many of her greatest film hits.

1940 saw Greer Garson playing Elizabeth Bennet opposite her stage leading man, Lawrence Olivier, in the sparkling classic, “Pride and Prejudice.” That hit was followed by “Blossoms in the Dust,” a tear-jerker in which she played Edna Gladney, a passionate crusader for the rights of illegitimate children. Her magnificent flaming hair and porcelain coloring were seen for the first time in Technicolor.

Greer Garson’s career moved into high gear just as America was entering World War II and M-G-M stars like Garbo and Norma Shearer no longer seemed relevant to the troubled times. The world wanted pin-up girls like Betty Grable or noble, brave heroines like the women so ably played by Greer Garson with her English accent, her regal beauty, her throaty, modulated voice and her impeccable manners. When she was cast as “Mrs. Miniver,” America hadn’t as yet entered the war. The emotional, heart-wrenching view of an average British family carrying on despite hardship is credited with firing public sympathy and support for the war movement. Greer Garson won the Best Actress award and legend has it that her acceptance speech was interminable; some reports insist it was a half hour long. The truth is that it was only five and half minutes in length.

She starred in hit after hit such as “Madame Curie,” “Random Harvest,” (arguably the most romantic movie of all time) “When Ladies Meet,” Mrs. Parkington,” “Julia Misbehaves” and “Valley of Decision,” adding up to a roster of more than twenty-five films. Walter Pidgeon was often her leading man.

In 1945, Clark Gable returned from the army and his comeback film, “The Adventurer,” was advertised with the tagline “Gable’s back and Garson’s got him!” But the end of the war marked the beginning of a decline in popularity for the kind of “women’s films” that had made Greer Garson one of the great leading ladies of all time. She returned to the stage in 1958 when she replaced Rosalind Russell on Broadway as “Auntie Mame.” Although she continued to make the occasional film like “Julius Caesar,” “The Happiest Millionaire” and “The Flying Nun,” plus TV appearances, she became the sort of great lady she had so often played in movies. She endowed two collegiate theatres at the University of Santa Fe and Southern Methodist University.

Her personal life had a belated happy ending. Her first, early marriage ended in divorce and her second marriage was a bit scandalous when she wed actor Richard Ney who was not only many years younger than she, but had also played her college-age son in “Mrs. Miniver.” She finally found great happiness when she married Texas millionaire, Buddy Fogelson, enjoyed living on his ranch and spent the final years of her life in Dallas where she graced the social scene until her death in 1996 at age 91.

Greer Garson’s ladylike presence, her distinguished beauty and heartfelt performances made her one of Hollywood’s all time great leading ladies, a star who, as“Mrs. Miniver,” truly made history.