from Dorothy Lamour Paper Dolls by Jim Howard (out of print) 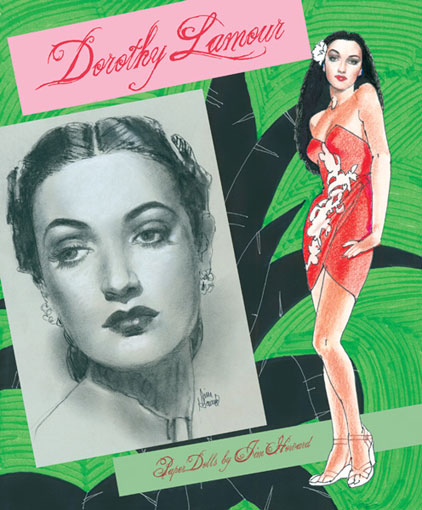 Hollywood created an enduring vision of sultry Dorothy Lamour in a native sarong, her long dark hair hanging down to her waist, her face an exotic cameo. Most moviegoers thought she truly was actually the Polynesian jungle princess she portrayed in almost a half dozen films in which she was cast in that stereotypical role. But in truth, Mary Leta Dorothy Slaton, born in New Orleans in 1914, was French, Spanish and Irish.

Although she had no formal voice training, the young beauty who had dropped out of high school to attend secretarial college became a radio star after winning the Miss New Orleans beauty contest in 1930. She moved to Chicago and got a job as an elevator operator at Marshall Field department store, but auditioned as vocalist for Herbie Kay's band. Not only did she get the job, but she married the bandleader in 1935 and had her own radio show. She moved to Manhattan where Rudy Vallee became her mentor, helping her to sing at El Morocco, the famous nightclub and also featured her on his popular radio show. At the same time Louis B. Mayer spotted the star potential of the pretty vocalist and arranged a screen test that eventually led to a contract with Paramount Studios in Hollywood.

The name Dorothy Lamour may seem like a studio-generated moniker, but the star herself devised it from her stepfather's surname, Labour. It perfected suited the exotic persona that captivated audiences in the 1935 film that made her famous, The Jungle Princess, in which she played "Ulah", dressed in a strapless sarong artfully draped by Edith Head. Although Dorothy Lamour made more than 50 movies in her long career, she never managed to escape the indelible image of an exotic native in films that included The Hurricane (1937), Her Jungle Love (1938), Typhoon (1940) and Aloma of the South Seas (1941). Photos of the sarong-wearing star became one of the most popular pin-ups during World War II. She contributed to the war effort by organizing and starring in tours that sold more than $21 million worth of War Bonds.

When she wasn't wrapped in a sarong or trading quick quips with Bob and Bing, Dorothy Lamour made scores of films including St. Louis Blues (1939), Johnny Apollo (1940), My Favorite Brunette (1947) and The Greatest Show on Earth (1952). Throughout her film career, the star continued to sing and introduced some great popular standards including The Moon of Manakoora, I Remember You and But Beautiful. Her leading men included such stars as William Holden, Tyrone Power, Ray Milland, Henry Fonda, Jack Benny, George Raft and Fred MacMurray but in real life, she was married to William Ross Howard III from 1943 until his death in 1978.

After her film career declined in the 1950s, Dorothy Lamour devoted herself to the nightclub circuit and the theatre. She headlined in the road company of Hello, Dolly! She also made guest appearances on many popular TV shows such as Hart to Hart and Murder, She Wrote.

In 1994, Dorothy Lamour died of a heart attack at age 81 but the image of the beautiful native girl in a gracefully draped sarong is an historic Hollywood vision that will forever endure.