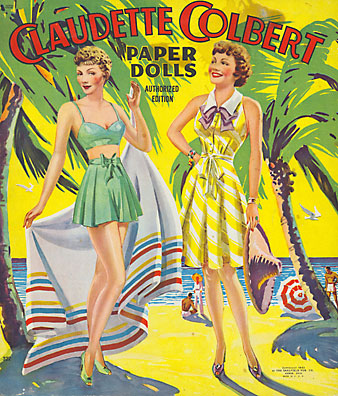 With her piquant, heart-shaped face, her high, sweeping brows and her signature bangs, Claudette Colbert’s image, carefully controlled by the star herself, sparkled in scores of movies during the 1930s and ‘40s when she reigned as one of Hollywood’s most popular leading ladies. She won the Academy Award forIt Happened One Night in 1934, the same year that she starred in two other films also nominated for Oscars,Cleopatra and Imitation of Life. Such was her versatility that Colbert could play in a spritely comedy, an historical biography and a romantic drama with equal expertise. Her personality plus a distinctive voice, a merry laugh and heartfelt sincerity, seemed to bubble off the screen with the lightness of sparkling champagne.

Claudette Colbert was a perfect subject as a paper doll, a stylish and doll-like natural beauty. When her career was at its peak, a highly collectible book  was published by Saalfield in 1943 Decades later, Marilyn Henry paid homage to Colbert with a meticulously researched and beautifully rendered paper doll book containing many costumes worn in the star’s most popular films. 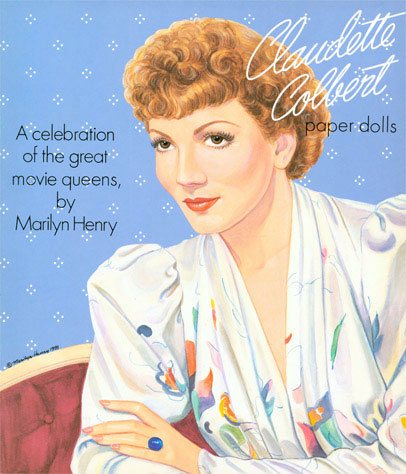 Interestingly, the star who came to represent American womanhood at its best in films was born in France in 1903. Her family emigrated to New York when little Emilie Claudette Chauchoin was three years old. Her illustrious career began when she made her stage debut at age 15. She went on to play ingénue roles on Broadway until 1927 when she filmed For the Love of Mike, a silent movie, now lost. The following year she signed a contract with Paramount Studios and initially appeared in a few films that were shot in both English and French. Her co-star Maurice Chevalier described her as “a delicious comedienne.” Subsequently she sang in a musical opposite him,The Smiling Lieutenant, (1931).

As her film career gained momentum, Colbert’s acute business sense helped her to negotiate a new contract that allowed her to appear in films at studios other than Paramount and by 1936 Claudette Colbert was Hollywood’s highest paid actress.

Although she was sweet and spritely on screen, the star’s control issues regarding her looks have become notorious. She believed that the left side of her face photographed better than the right and caused many cameramen great difficulty. Director Frank Capra said, “She was a tartar, but a cute one.” Producer David O. Selznick bemoaned that fact that some sets had to be rebuilt because Colbert refused to turn her head! It’s possible that she was correct in her assessment because she took great pains to learn about lighting and cinematography, sometimes even hiring her own cameraman. Such fastidiousness also affected her wardrobe. Claudette Colbert was so chic in her private life that she was elected to the Best-Dressed Hall of Fame. She insisted her movie costumes also must be perfect and was very astute about concealing her flaws. Because she felt her neck was short, even high necklines on her outfits were scooped lower than usual. Noel Coward, furious with her when they disagreed about a scene, said, “I’d wring Claudette’s neck if she had one!” When she disapproved of the first set of sketches by Travis Bantam for Cleopatra, she purposely gave herself a paper cut and bled all over the artwork so it would have to be done over again.

In 1999, the American Film Institute placed Claudette Colbert at number 12 in its list of the “50 Greatest American Screen Legends.” Her cinematic image was described by one film critic as “…American’s idealized view of themselves…breezy, likeable, sexy, gallant and maybe just a little hare-brained.” But before that image locked-in, Colbert played against her own type in Cecil B. DeMille’s The Sign of the Cross (1932). In it, as Roman empress Poppaea and she appeared nearly nude taking a bath in a marble tub filled with milk. She again played a nearly-naked siren in DeMille’s epic version of Cleopatra, in stunning, albeit totally inauthentic, glamour garb, dripping yards of pearls and gold lame. (Colbert is one of the four cinematic Cleopatras included in my own paper doll book, “Cleopatra in the Movies” available atpaperdollreview.com.) Colbert’s first Technicolor film,Drums Along the Mohawk, (1939) convinced the diva-like star that she looked her best in black-and-white, a belief she stuck to for decades. The star lost one role that might have been her greatest, that of Margo Channing in All About Eve. It was originally written for her but illness prevented her from playing the part that Bette Davis made legendary.

Over the years, Claudette Colbert’s roster of leading men reads like a Who’s Who. She co-starred with Clark Gable, Fredric March, Fred MacMurray, Melvyn Douglas, Ronald Colman, Charles Boyer, Gary Cooper, Don Ameche, Ray Milland, James Stewart, Henry Fonda, Spencer Tracy and Joel McCrea. She smoothly transitioned from screwball comedies and romantic dramas in the ‘30s into more mature, character roles in the 1940s. However, she was highly sensitive about her age and had to be convinced to play a mother to Jennifer Jones and Shirley Temple in Since You Went Away. She famously feuded with Paulette Goddard during the filming of So Proudly We Hail (1943) when Colbert overheard her costar refer to their age difference.

When her film career began to decline, Colbert returned to Broadway and in 1958 was Tony nominated for The Marriage Go Round. She also appeared frequently in teleplays and won a Golden Globe plus an Emmy nomination in 1987 for The Two Mrs. Grenvilles. The Kennedy Center Honors celebrated her lifetime achievement in 1989.

Claudette Colbert was married twice, rather unconventionally as she seemed to live apart from both husbands. She died at age 92 in her idyllic Barbados island home in 1996 after a series of strokes and left the bulk of her estate to her longtime friend, Helen O’Hagan, a retired director of Saks Fifth Avenue.

An important star for decades, Claudette Colbert personified the intelligent, humorous and stylish woman that helped define femininity for her generation.