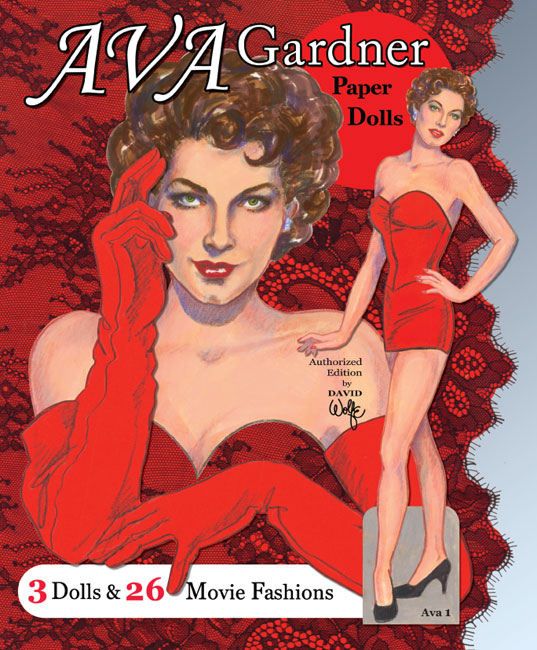 Her beauty was unique, her face seductive and her body as graceful and sensuous as a panther; Ava Gardner’s looks made her a great star and an international legend. She smoldered on the screen in 67 movies; the first, an uncredited role in 1941 and the last, a television film in 1986. In between, she appeared in great films such as Show Boat, Night of the Iguana and Mogambo. Her down-to-earthiness belied her glamour and added depth to her performances. During her long career, Ava played many passionate women, but none as fiery as the star herself.

This is an almost unbelievable fairy tale life story of a country girl whose beauty propelled her to the peak of international fame as a movie star. The story begins in 1922 when Ava Lavina Gardner was born, the youngest of seven children, in North Carolina. She grew up in the rural countryside in Grabtown and Brogden (little more than streets, even today) but also has roots in Smithfield which is the county seat, prime tobacco country. Her father was a hard-working, well-off tenant farmer, even during the Great Depression. Ava graduated from high school in 1939 and attended Atlantic Christian College. Her older sister, Bappie, had married a professional photographer, Larry Tarr, and lived in New York City. When 18-year-old Ava went to visit, her brother-in-law took a few portraits of the young beauty and displayed them in the window of his Fifth Avenue shop. At this point, the legend begins. A young errand boy who worked for Lowes Theatres saw the photos and tried unsuccessfully to get Ava’s phone number for a date. His interest gave the photographer an idea. He sent the photos to MGM Studios’ New York office. Ava was immediately offered a screen test that relied strictly on her stunning looks. She spoke not a word because her strong southern accent made her almost impossible to understand. That didn’t matter. It is said that Louis B. Mayer, head of MGM, watched the test and exclaimed, “She can’t sing, she can’t act, she can’t talk. She’s terrific!” Teenage Ava was given a seven-year contract, starting at $50 a week, and was off to Hollywood.

When Ava began her career in 1941, MGM was indeed a star factory, grooming and polishing personalities to perfection. It took five years of uncredited, usually silent walk-on roles in 20 films before Ava had been divested of her accent and glorified into the image of a goddess. Meanwhile, she had married the biggest movie star of the time, Mickey Rooney. They divorced after a year and she was wed for a short time to band leader and man-about-town, Artie Shaw. Later, her tumultuous romance with Frank Sinatra caused a scandal when the popular crooner left his wife to marry Ava, a marriage that only lasted six years (1951-1957) although she called Sinatra the love of her life. Her private life was always press-worthy, including as it did, romances and friendships with such charismatic males as Howard Hughes, Robert Taylor, Ernest Hemingway, George C. Scott and bullfighter, Luis Miguel Dominguin. Ava also had enduring friendships with Lana Turner, Lena Horne and Princess Grace.

It was 1946 when Ava at last broke into the big time, starring in The Killers with Burt Lancaster. That was the first of a long string of successes including The Hucksters, One Touch of Venus and Pandora and the Flying Dutchman. The 1950s was the decade in which her career peaked and her private life made constant headlines. She landed the plum role of tragic Julie LaVerne in Show Boat, went on safari in The Snows of Kilimanjaro, reigned as queen in Knights of the Round Table, embodied Hemingway’s poignant heroine in The Sun Also Rises and received an Oscar nomination for playing opposite Clark Gable in Mogambo. The Barefoot Contessa defined her screen image as a woman of passion, with an advertising campaign that famously billed her as “the world’s most beautiful animal.” Her hits continued into the 1960s with Bhowani Junction, Mayerling, The Naked Maja, On the Beach, 55 Days at Peking and Tennessee Williams’ The Night of the Iguana.

As her career slowed down during the 1960s, ’70s and into the ’80s, Ava’s allure never diminished even though she was playing supporting roles and making cameo appearances such as her ravishingly beautiful Lily Langtry in The Life and Times of Judge Roy Bean. Her career culminated with guest shots on several television productions including Knots Landing. After having lived in Spain for a decade, she moved to London. Suffering from emphysema, she was the victim of a stroke in 1986 that left her partially paralyzed and bedridden. Ava died of pneumonia at age 67.

Hollywood history is written in the stars, and Ava Gardner’s potent glamour and unique beauty ensure her place with the great names that blazed on movie marquees during the Golden Age of the Silver Screen.