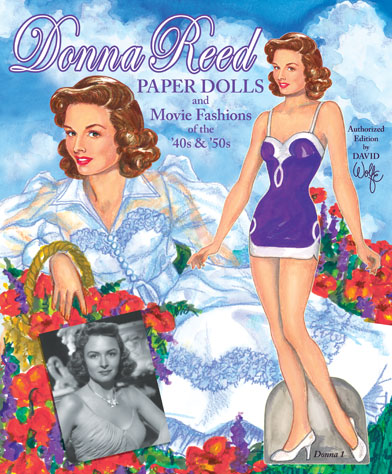 Before she starred in the eponymous TV family sit-com that first aired in 1958, Donna Reed was a popular movie star with over 40 films to her credit. This paper doll book celebrates her Hollywood career with costumes from many of those films made in the '40s and '50s. . In most of them she was perfectly typecast as a very pretty ingénue, the proverbial girl next door. No wonder. She was an all-American beauty, a farm girl from Denison, Iowa, where she was born Donna Belle Mullenger in 1921.

After high school, having won a local beauty contest, young Donna headed for Los Angeles where she attended City College and starred in several stage productions. The wholesome beauty was crowned Campus Queen and she came to the attention of M-G-M talent scouts. She was signed to a contract. However, the sensible young woman insisted on finishing her education.

Soon Donna Reed was on the silver screen, at first playing very minor roles such as a secretary in Babes on Broadway with Mickey Rooney and Judy Garland (1941). That same year she played a supporting role in The Shadow of the Thin Man with William Powell and Myrna Loy. Within a short time she became a leading lady, always pretty as a picture and pure as driven snow. See Here, Private Hargrove (1944) cast her opposite Robert Walker in a cute comedy and she played a more dramatic role in The Picture of Dorian Gray (1945).

In 1946 the successful young star was lent to RKO Pictures for the role of Mary Bailey in Frank Capra's It's a Wonderful Life. The film has become a perennially popular Christmastime classic and Donna Reed's performance as the devoted wife of James Stewart is nothing less than heart-warming. The film, originally not a huge hit, has been named by the American Film Institute as one of the 100 best American films ever made.

By the end of the forties, Donna Reed was established as a busy Hollywood Star. She costarred with Alan Ladd in two films, Beyond Glory (1948) and Chicago Deadline (1949), an excellent film noir mystery. Her sweet screen image meant that she was often cast as the foil to sultry sirens such as Lana Turner in Green Dolphin Street(1947) and Elizabeth Taylor in The Last Time I Saw Paris(1954).

The big surprise of her cinematic career came when Donna Reed was cast absolutely against type in the Academy Award winning Best Picture of the Year, From Here to Eternity (1953). No longer the sweet innocent, in this intense wartime drama she played the role of an emotionally hardened bar girl who falls in love with Montgomery Clift just before he is killed. Her stand-out performance was rewarded when she herself won the Academy Award for Best Supporting Actress. That same year, the versatile star was seen in The Caddy, a rollicking comedy featuring Dean Martin and Jerry Lewis. Again in 1955, Donna Reed played roles in two films that could not have been more different. In The Benny Goodman Storyshe was the bandleader's glamorously-gowned, high society romance, and in the most offbeat casting imaginable, she played Sacajawea, the Native American who guided the Lewis and Clark exhibition in The Far Horizons.

Donna Reed's career changed tracks from films to television in 1958 when she took on the role of Donna Stone, the archetypal American wife and mother in the hugely successful series, The Donna Reed Showproduced by her then-husband, Tony Owen. It ran for eight seasons and garnered the star a Golden Globe award and four Emmy nominations. In real life, she was wed three times and mothered four children.

When her TV series ended, Donna Reed pursued other interests for a while. She formed the activist group, Another Mother for Peace, in 1967. She was also an active opponent of the Vietnam War and the use of nuclear weapons. She returned to acting with guest spots on television and in 1985 assumed the role of "Miss Ellie" on Dallas for a single season.

Donna Reed. a lovely movie ingénue who went on to become a beloved TV star.