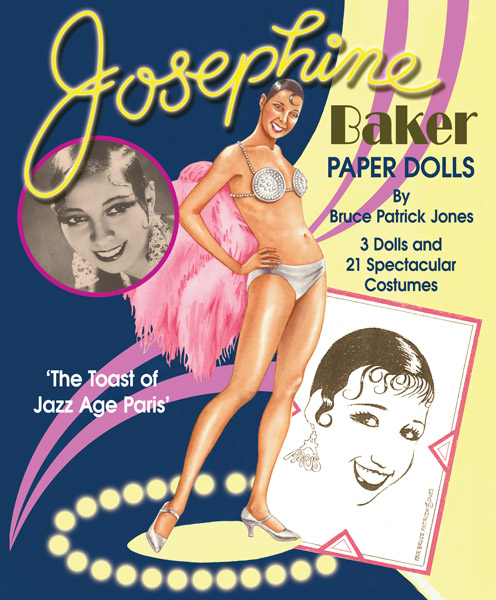 f a novelist like Danielle Steele ever created a heroine with a life like Josephine Baker's, it would surely be ridiculed as impossible.  An African-American girl from the St. Louis slums takes Paris by storm with her glamour, becomes a sensational star, segues into being a spy, is honored with medals, bravely promotes Civil Rights, adopts six children and at age 68 dies in bed surrounded by newspapers containing rave reviews for her latest show biz triumph.  It would make a great film and did, in fact, become a hit HBO TV mini-series that won a 1991 Emmy for its star, Lynn Whitfield who played the lead.

Josephine Baker was real, even though her extraordinary life may seem too far-fetched to have happened.  It did. She was born in 1906 in St. Louis, perhaps of mixed-race but certainly the granddaughter of slaves.  Forced to go to work at age 8, she was abused and escaped to the streets where she existed by dancing for pennies on the sidewalk. At 15, she joined a vaudeville troop and headed for New York where she danced in Harlem revues and became known as "the highest paid chorus girl in vaudeville".

In 1925, Josephine Baker opened in Paris at the Theatre des Champs-Elysees and caused a sensation.  Her dancing was erotic and her costume almost non-existent.  She toured Europe and then joined the famed Folies Bergere where she performed a danse sauvage, wearing not much more than a tiny skirt made of artificial bananas.  Later, her shows included her pet cheetah whose diamond collar and leash sometimes didn't prevent the dangerous beast from escaping into the orchestra pit. The young star's exotic beauty complemented the interest in African art and culture that was part of the flourishing Art Deco cultural movement of the decade.

Josephine was idolized. Ernest Hemingway described her as ..."the most sensational woman anyone ever saw."  Then in 1934, Josephine Baker advanced her career by seriously studying voice and taking the lead in a revival of Offenbach's 1875 opera, La Creole.  She went from being a sex symbol to grand divaShe made several movies in France and was the first African-American woman to take a leading role in a film. Although she was a superstar in France and a phenomenon throughout Europe, the star never achieved the same degree of success in America.

During World War II, Josephine Baker's stellar popularity made it possible for her to travel in Europe without Nazi interference and she volunteered to spy for her adopted country.  Being black and married at the time to a Jew, she naturally reviled the Axis policies of racism. Reporting information she overheard from high ranking Allied officials at social gatherings and helping those escaping the Occupation, she aided the Resistance in many ways.  She sometimes carried secret messages inscribed with invisible ink on her sheet music. After the war ended she was the first American-born woman to be awarded the Croix de Guerre.

Josephine Baker was an inspirational activist in the American Civil Rights Movement.  Working with the NAACP, she refused to perform to segregated audiences, brought charges of racism against The Stork Club and is responsible for helping to integrate shows in Las Vegas.  In 1963 she was the only woman to speak at Martin Luther King's side during the March on Washington.  After King's assassination, she was asked to head the movement but refused because her children were too young.  Josephine had adopted twelve multi-ethnic children she called her "Rainbow Tribe."  She had no children of her own although she was married six times (twice illegally, in fact).

Later in her life, the star fell upon hard financial times and was aided by her close friend, Princess Grace of Monaco.  The Princess along with her husband, Prince Rainier and Jacqueline Kennedy Onassis financed a retrospective review to celebrate Josephine Baker's 50thyear in show business in 1975.  The 68 year old entertainer triumphed on opening night, resplendent in feathers, furs and jewels, every bit the extraordinary, larger-than-life legend.  Four days later she suffered a cerebral hemorrhage and died peacefully in bed where she had been re-reading her rave reviews.  Her funeral at L'Eglise de la Madeline brought Paris to a standstill.  It was a French military service, the first time an American woman had been so honored.  She is interred in Monte Carlo.