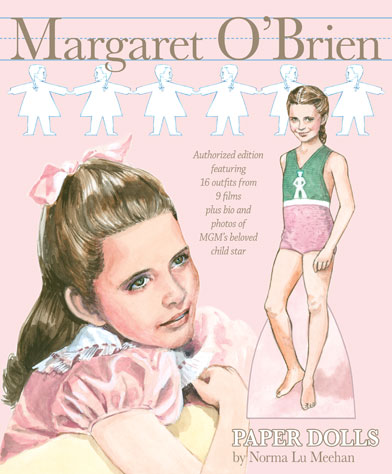 Legendary child star Margaret O'Brien is considered by most critics and cinema historians as the greatest child actress ever to appear on the screen. A gifted dramatic performer, she was one of the most popular movie stars of the 1940s.

At age three, little Angela O'Brien expressed a serious desire to pursue acting while posing for photographer Paul Hesse, and she made her screen debut at age four in a short scene in Babes on Broadway (1941). Studio executives immediately recognized her talent and sensitivity. A year later she was a major movie star, having undergone a name change inspired by her great success playing the lead role in the sentimental film, Journey for Margaret. That was the first in a string of brilliant performances. Under contract to prestigious MGM Studios, she was a dramatic actress who specialized in playing teary-eyed little girls.

Margaret masterfully performed roles requiring acting experience far beyond her years. In Jane Eyre, she spoke with a flawless French accent. Her most famous quote reveals what a consummate professional she was when she asked a director, "When I cry, do you want the tears to run all the way or shall I stop them halfway down?"

Margaret was honored with a special Academy Award for Meet Me in St. Louis as the outstanding juvenile performer of 1944. As Tootie Smith, she co-starred with Judy Garland, was both dramatic and very funny, and added singing and dancing to her repertoire of talents. While still a child, her other major successes included The Canterville Ghost (1944), Our Vines Have Tender Grapes (1945) and The Secret Garden (1949). Her touching portrayal of Beth March in Little Women (1949) co-starred her with MGM's top female stars of the day, June Allyson, Janet Leigh and Elizabeth Taylor.

She achieved super-star status during Hollywood's Golden Era, and had a career most actors can only dream about. Today Margaret continues to receive film and television offers, and has guest-starred on many television shows, including Murder, She Wrote and Tales from the Darkside. Margaret remains very active in charitable affairs and most recently completed the new film Frankenstein Rising (2010).

During her childhood stardom, Margaret was the subject of several paper dolls and coloring books, as well as other endorsed products. This new paper doll book by Norma Lu Meehan captures the sweet sensitivity that won the popular child star the title "America's Favorite Sweetheart." Margaret O'Brien, the child star who made movie history with tearful dramatic performances that touched the hearts of moviegoers.