The Gay 90s in the Flirty 40s
Turn-of-the-Century fashion turned up again forty years later, not only in closets but also in movies, coloring books and of course, paper dolls.
by David Wolfe 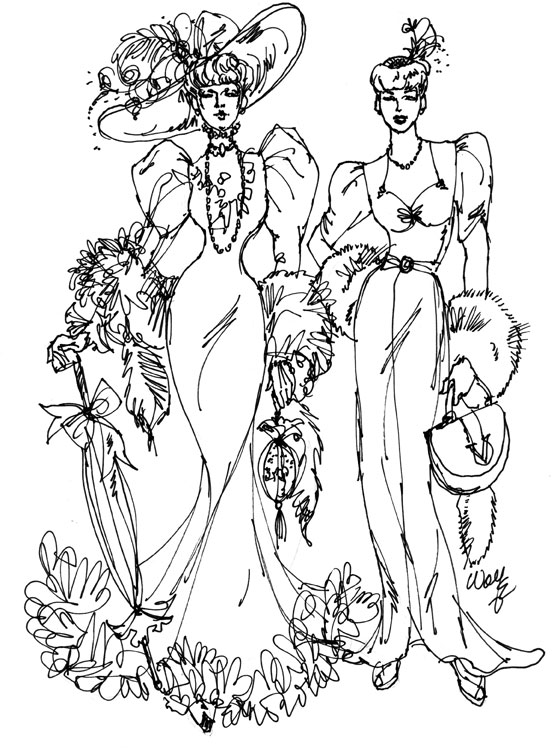 Anyone who bemoans the fact that so many of today’s fashion are unoriginal retro repeats of the past should realize that this is nothing new. The fashions of the Gay ‘90s happened more than once. The signature style that defined how women looked at the turn of the century was too wonderful not to return. It took just forty years for hourglass shapes, cartwheel hats and leg o’ mutton sleeves to be fashionable again.

It is easy to understand what prompted the revival. War was raging on two fronts in Europe and the Pacific. The homefront was suffering. Those were terrible times. How understandable that a longing for a more peaceful, gracious time would crate mass nostalgia. Most often, fashion nostalgia seems to recall the period just before one was born. Your grandmother’s style seems romantic whereas your mother’s just seems old-fashioned. So, the young women of the 1940s looked back to the Gay ‘90s as a period infinitely preferable to their own troubled time.

Comparisons between fashions of the Gay ‘90s and the Flirty ‘40s are easy to make. Leg ‘o mutton sleeve had big, puffed shoulders that became the sholder pads of the ‘40s. Hourglass silhouettes where relaxed a bit, but the waistline was well defined and popular sweetheart necklines echoed a more bosomy shape. Hats, though not as huge as the feather cartwheels of the ‘90s, became frivolous concoctions of flowers and veiling. Even hair styles recalled the past as big pompadours and upsweeps copied the look of a Gibson Girl.

Hollywood was very aware of the need for escapism and released a plethora of movies that were set in the Gay ‘90s. Some were dramas like “The Little Foxes” or“Gaslight.” But the most popular were the musicals that replayed familiar tunes and offered costumers the opportunity to dress the stars of the day in romantic fashions. Some designers did it with integrity to the period they were recreating, but most just created costumes that suggested, rather than repeated, the period verbatim. Fabric shortages and other wartime restrictions were sometimes responsible. Forties rayon often replaced the silks of the past. Nevertheless, those movies are gems and a joy to watch on DVD or tape today.

Betty Grable in “Coney Island,” 20th Century Fox, 1943, looked luscious with upswept pompadour hair and cartwheel hats. Nobody told the costume department that strapless gowns would have been too shocking in the Gay ‘90s. “Mother Wore Tights”, 1947, put Betty in mid-calf slit skirts despite disagreement from designer Orry-Kelly. Other Grable gturn-of-the-century hits include “Wabash Avenue” and “Diamond Horsehoe.”

Other stars alos donned Gay ‘90s costumes for scores of nostalgic musicals. Alice Faye played Lillian Russell in a movie-bio of the same name, 20th Century Fox, 1940, and in 1943 again she wore period gowns in “Hello, Frisco, Hello.” Rita Hayworth wasn’t always as sultry and sexy as she was in “Gilda.” She looked beautifully elegant in turn-of-the-century costumes in “My Gal Sal”, “Strawberry Blonde” and flash-back sequences in “Cover Girl.” “The Harvey Girls,” MGM, 1946, starred Judy Garland costumed by Helen Rose as she travels on the Atchison, Topeka and the Santa Fe to join a gaggle of waitresses in New Mexico in 1890. The costumes, especially Judy’s robin’s egg blue traveling outfit and Angela Lansbury’s gold saloon-keeper’s outfit are glorious in Technicolor.

The stars of those movies, especially the musicals, were always the subject of intensive publicty and product tie-ins. Young movie-goers were wooded by coloring books and paper dolls. Today’s collectors can often find Gay ‘90s fashion references in their ‘40s vintage treasures. “Rita Hayworth, Dancing Star,” a coloring book from the ‘40s, shows the star in many Gay ‘90s costumes. Betty Grable, Alice Faye and Greer Garson paper doll books feature some of the best examples, actual costumes from their period movies.

Nostalgia is a potent force in fashion and in our lives. The past is replayed again and again, just it was the 1940s replayed the Gay ‘90s.