Pin-Ups: Popular art for the Average Guy
A peek at those pretty, perky, saucy and sometimes naughty girls
by David Wolfe

Article from Paperdoll Review Magazine Issue 40, 2007 (out of print) 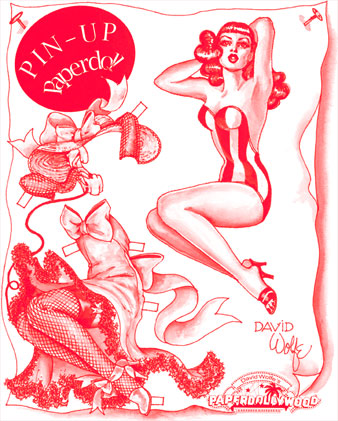 Pin-up girls and paper dolls are sisters of a sort, although pin-ups are best known for their lack of clothes while paper dolls have wonderful wardrobes.Both were considered throw-way pop art in their shared prime years, and now both are valuable collector items. Indeed, a careful study of vintage paper doll books often reveals that the rendering techniques and the poses were borrowed from great pin-up artists like George Petty. Both pin-ups and paper dolls were created by some of the most talented artists of their time and both represent idealized feminine beauty.

The history of the pin-up girl could be seen as the story of a good girl gone bad. She began life around the turn of the 20th century as a classy, elegant ideal and like some sort of strip-tease artist, she slowly but surely shed her demeanor along with her clothes until she was left brazenly naked in “Playboy” magazine. Along the way, the pin-up girl was immortalized by scores of wonderfully talented artists. They were known as illustrators since their work was commercial, but today their amazingly prolific output is becoming appreciated as the fine art it truly was. While most of the artists were male, there were a surprising number of successful female talents who painted pin-ups, too.

The pin-ups painted by those truly great illustrators were eventually eclipsed by photographic images. For a while, they coexisted. Photos, usually of Hollywood stars and starlets like Betty Grable and Esther Williams, or models like the “notorious” Bettie Page, were popular but for years they couldn’t replace the calendar girls or the cover girls on the many men’s magazines painted in all their luscious, full-figured glory.

The rise and fall of the painted pin-up girl reflects the tremendous changes wrought in the world from her first appearance, all starched and swan-like, to her final prurient poses. She went from nice to naughty and was finally unable to compete with explicit graphic nude photos. That trajectory echoes the social and sexual changes affecting America decade by decade.

The beginning of the 20th century, so mannered and repressed, liked its pin-ups to be pretty and prim. By the time the 1920s roared in, many boys could not be kept down on the farm because they’d “seen Paree” and the saucy French postcards they bought there during the first World War. The Great Depression of the 1930s created a hunger for glamour and escape that was not only filled by radio and the movies, but also by images of well-fed, carefree pin-up girls. The vast male population fighting World War II viewed images of idealized girls back home as great morale boosters. Even Generals Eisenhower and MacArthur went on record as being pro pin-up. So what if no real girls ever were as goddess-like as the air-brushed beauties created by the two greatest pin-up artists of all time, George Petty and Alberto Vargas? The post-war years saw the pin-up playing a teasing game that hinted at the sexual revolution to come in the Swinging Sixties. Finally, the total, let-it-all-hang-out liberation of the Seventies marked the death knell of the painted pin-up. Her reign as the average guy’s dreamgirl was over, but for almost an entire century she had graced the walls of male admirers in garages, barber shops, barracks and the bedroom of many a teenage lad.

Although today’s view of the pin-up girl is limited to saucy and sexy images, there were two other alternatives. Pretty girls, simply paintings of lovely young women were the first pin-ups. Glamour girls, fully clothed and dressed for sports or for dancing, were popular for many years along with their more scantily clad sisters. The impossibly perfect bodies of pin-up girls were seldom nude, more often they wore painted-on swimsuits or sexy undies or managed to almost cover themselves with very strategically placed props or accessories. They were as sweet as they were sexy, often in the company of frisky pets. They seemed to be on the telephone a lot, perhaps the precursors of today’s phone sex.

Images of pretty girls got attention and that made them popular for commercial purposes, whether dressed or undressed. They were painted, most importantly, at very high fees, for the covers of magazines, a tremendously important part of American culture. “Life,” “Colliers,” “The Saturday Evening Post,” “McCalls,” “Esquire,” “Cosmopolitan” and “Redbook” were just a few of the many popular magazines constantly vying for readers’ attention. The advent of the commercial calendar used to promote products and businesses offered beautifully reproduced pin-up art. Companies like Coca-Cola and Kodak realized that pin-up girls could sell their brands to the American public. At their peak, pin-ups appeared on everything from playing cards and matchbook covers to billboards and the bellies of bombers during World War II.

Charles Dana Gibson is credited with giving birth to the very first popular pin-up girl, so popular she became a phenomenon, like a media celebrity of today. She was tall, graceful, assured and aristocratic with a long neck, magnificent upswept hair and a touch-me-not attitude. She was always fully clothed. “The Gibson Girl” who first appeared in 1887 captured the public imagination and become an icon. She was delicately sketched in fine pen lines, a technique ideal for early printing methods. As printing techniques improved, artists who worked in gouache, pastels, watercolor, airbrush and even oil paints allowed the pin-up girl to burst forth in rich, gorgeous, better-than-living color.

Even though he did not paint pin-up girls as such, J.C. Leyendecker, the famed illustrator has to be mentioned because his creation, the Arrow Collar Man, became so well known, so admired that it is said he actually received marriage proposals from young women smitten with this illustrated male ideal. The stalwart hero became virtually the only male pin-up in history.

Although there were many, many pin-up artists flourishing for decades, only a few are well known today. Howard Chandler Christy, Coles Phillips, James Montgomery Flagg, Gil Elvgren and Fritz Willis are just a few of the illustrators who were very well known in their time. Alberto Vargas and George Petty are the two towering talents whose work is today deservedly thought to epitomize the pinnacle of pin-up art.

Alberto Vargas had a career that spanned decades and went from creating paintings of glorified Ziegfeld Girls to the famous “Esquire” calendars and finally to Hugh Hefner’s “Playboy.” He was born in Peru in 1896 where he learned how to operate an airbrush from his photographer father. After studying in Switzerland he came to New York when World War I broke out. Fashion illustration jobs led to a fortunate meeting with Florenz Ziegfeld who commissioned him paint portraits of Follies stars like Marilyn Miller, Paulette Goddard and Eddie Cantor. In 1927 Vargas went Hollywood and worked for Paramount Studios, then Warner Brothers and finally M-G-M. During those years, he painted Betty Grable, Marlene Dietrich, Ava Gardner and Marilyn Monroe. His lasting fame came with his calendars when, in 1940, he was put under contract by “Esquire” magazine to replace George Petty whose contract was expiring. Vargas’ contract specified that he drop the final “s” from his name. “The Varga Girl” became so famous and valuable to the magazine that years later, Vargas had to fight in court for the right to use his own name and was only allowed to do so if he signed his art with his full name, “Alberto Vargas.” Whichever signature appears, the girls are always the instantly recognizable; idealized beyond belief, gracefully erotic, long-limbed and sensuous, beautifully rendered with airbrush so that their flesh seems to glow from within.

George Petty’s creation, “The Petty Girl” ruled as the reigning pin-up queen from 1933 to 1956. Not only did her aggressively effervescent image grace calendars, magazines, advertisements and billboards, but she was the subject of a major 1950 movie starring Joan Caulfield and Robert Cummings. Petty was born in 1894 and grew up in Chicago where as a young man he worked in his father’s photo studio as a retoucher, learning the techniques that would later become his stock in trade. He studied in Paris and then returned to America where he became a successful illustrator, opening his own studio in 1926. His first pin-up girl appeared in the premiere issue of “Esquire” in 1933 and became famous. “The Petty Girl”was special. She almost exploded with personality. Cute and flirty, she had a mischievous twinkle in her eye, a radiant smile and although surprisingly short in stature, she had lively, but not very provocative, body language. In 1940 Petty designed and illustrated a fantastically successful swimsuit for Jantzen, painted ads for Pepsi-Cola, and created the only pin-up ever on the cover of“Time” magazine; a vibrant portrait of dancing Rita Hayworth.

After the glory, glamorous days of Petty and Vargas, the pin-up girl began her decline into blatant sexuality. The ‘50s saw her in many strange situations as she lost the battle to remain even partially clothed. Her expression of wide-eyed surprise remained the same as her skirts were often uplifted by sudden gusts of wind or the leash of a puppy dog, caught in a file cabinet or stuck on a branch. One unlucky pin-up had her skirt almost shot off by an arrow! All these amusing gimmicks were devised simply to allow a glimpse of stocking tops and garters. One artist, Art Frahm, painted a popular series of pin-ups who were coy and cute yet absolutely amazed to find themselves in preposterous, silly scenes with their panties accidentally around their ankles.

Interestingly, it is Vargas whose final pin-ups mark the end of the road for the long line of lovely creatures that began with “The Gibson Girl.” When Hugh Hefner rediscovered Vargas in the ‘60s and commissioned him to paint pin-ups that resemble a fantasy flesh and blood version of a blow-up sex doll, it was time for the pin-up girl to get dressed and depart. And that is just what she did, but she left behind a great legacy... paintings that are now being reevaluated by collectors and aficionados who recognize their value, not only as fine art, but as a reflection of changing social history.