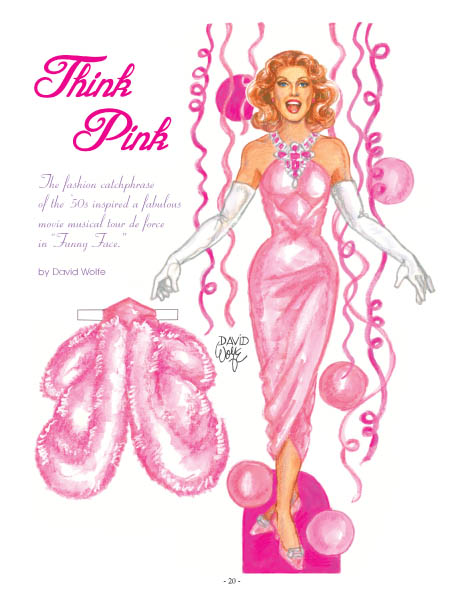 Thinking Pink has been in fashion forever. Sometimes it stole the spotlight from every other color. Elsa Schiaparelli, the Italian designer whose career was at its peak in the ‘30s, made the color her signature and named it “Shocking Pink.” Fashion historians still refer to that shade of rose as “Schiap Pink.” Powerhouse fashion editor, Diana Vreeland, ever quotable, declared that “Hot pink is the navy blue of India!”

By the time Paramount made the movie Funny Face in 1956, pink had already become the defining fashion color of that decade. Women in the ‘50s rediscovered their femininity having lived through and survived the fashion deprivation of World War II. The Golden Age of Haute Couture returned Paris to preeminence and fashion reflected the explosive post-war affluence. It was an apt time for a film devoted to fashion. However, the film had to appeal to a mass audience and the snooty high fashion world was an obvious target for some sharp satire. Funny Face did just that. It kindly shot amusing barbs at the world of high style and the movie was a resounding hit. Not only did the masses enjoy it, but the fashion world embraced it and continues to honor it decades later as perhaps the most entertaining film ever made about high fashion.

Audrey Hepburn was as close to a high fashion model as a movie star could be. Gamine, willow-thin, graceful and oh-so chic in stunning styles by her favorite French designer, Hubert de Givenchy, she was often photographed for high fashion glossy magazines. Plus she could dance quite passably, almost sing, and she radiated charm. Partnered with Fred Astaire (a bit elderly to be her love interest, but how that man could dance!), their romance on film was sans passion, but very sweet. He played a fashion photographer in the mold of famed Richard Avedon who was the technical consultant for the film. Audrey played a bookworm who is transformed, Cinderella-style into… well, Audrey Hepburn.

One might think it would be impossible to steal a movie from such high-wattage stars, but Kay Thompson did just that. She was not a star, but a behind-the-scenes major player in Hollywood. She taught stars to sing like stars, to develop a vocal style and really sell a song. (Judy Garland was a famous pupil.) Thompson was cast as Maggie Prescott, a pre-Anna Wintour fashion editor, running Quality Magazine who was modeled after outrageous, outspoken, out of this world Diana Vreeland of Vogue. Charismatic Kay opens the movie as she enters her office with dynamic propulsion and, surrounded by her stylish underlings, issues an order. “Take a memo to the women of America.” She pauses, reconsiders and corrects herself. “No, make that women everywhere!” Then comes the famous, somewhat clichéd dictate set to music, a joyous fashion anthem that still echoes through the salons and runways of the world. “Banish the black, burn the blue, and bury the beige! From now on girls... Think Pink!”

The lyrics of the colorful decree (see facing page) are “fashion-ese,” witty and delightful. The song becomes the soundtrack behind a montage of fashion images conceptualized by Avedon in his inimitable and legendary visual style. Every shot recalls the stunning visual impact of mid-century Vogue and Harper’s Bazaar. A blonde beauty, Sunny Pachett, steps out of a limousine in the rain, and her pink fox capelet drops to become an overskirt. Models wearing pink swimsuits swan dive in a graceful stop-motion montage. A trio of giddy models in pink evening gowns with enormous flowing skirts come sweeping through pink streamers towards the camera, kicking aside pink balloons. The model in the center is breathtaking and eye-catching. Suzy Parker, the world’s first true supermodel, making her screen debut.

There’s more and more of Suzy, the glorious, long-limbed, lively red-head from Texas. She is seen shampooing with pink shampoo. Then she brushes her teeth and squeezes pink toothpaste from the tube in a big slow-motion swirl. Exuberant in one shot, sophisticated in another, no wonder she was the top model of the ‘50s. Though Suzy Parker said not a single word during the lengthy production number, she oozed star quality and Hollywood took notice. She was swamped with offers from every major studio. She said, “No, thank you.” And she meant it. The offers got bigger and better until she couldn’t refuse. Signed to a long-term contract with Gary Cooper as her leading man in Ten North Fredrick and Cary Grant in line for her next film, success seemed imminent. The media declared that a star was about to be born. But then she spoke. Her voice was not as bad as Lina Lamont’s in Singin’ in the Rain, but it was a bit weak, high-pitched and rather wispy. It just didn’t match her super-sophisticated image. Nonetheless, she made a handful of films before calling it quits, marrying actor Bradford Dillman and retiring to lead a quiet life. Her best film was The Best of Everything.

Back to the “Think Pink” number. It ends with a punchline delivered perfectly by Kay Thompson. As her office doors are being painted pink and her assistants are prancing about in pink, she is asked why she, Maggie Prescott, is wearing gray. Why isn’t she, herself, thinking pink? Her reply? “Me, I wouldn’t be caught dead in it.” 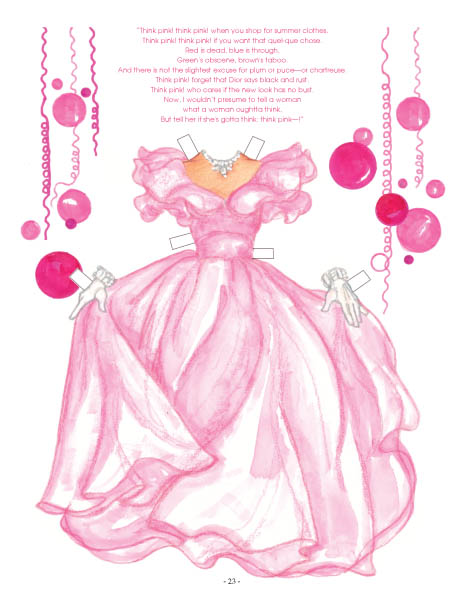