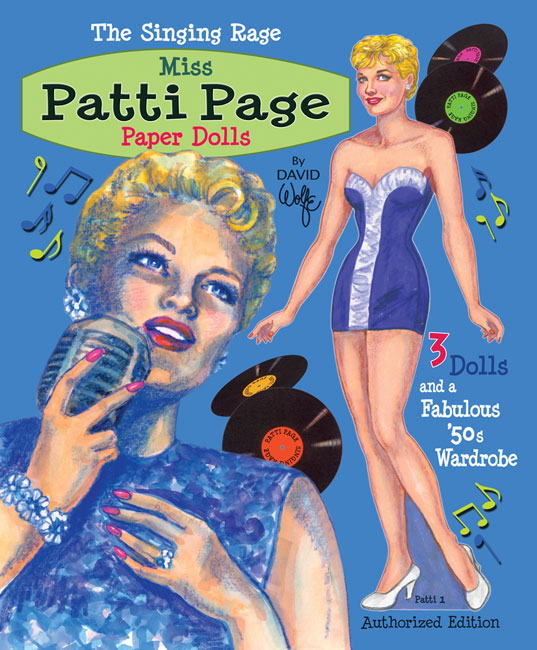 When little Clara Ann Fowler was running barefoot and playing in dusty Oklahoma where she had been born in 1927, nobody dreamed she would one day become a legendary recording star renamed Patti Page. She, the 10th of 11 children, came from a God-fearing, salt of the earth, poor family. From an early age, Clara Ann could sing and while still a teenager, she began a career that has made her honey-sweet voice familiar to generations of fans all around the world.

Her singing career came about accidentally. While working at the local radio station as a commercial artist at age 14, she was encouraged to cut a demo because the station's program director recalled hearing her sing in a school assembly. Soon she was singing on two programs and then was asked to take over another show that featured a vocalist called Patti Page (not the singer's real name). Clara Ann assumed the catchy name and was on her way. The road to stardom was a smooth but steep climb, and Patti's drive and determination helped her to achieve record-breaking success.

Patti Page's first stepping stone to stardom occurred when Bob Hope came to Tulsa and sponsored a singing contest. Out of hundreds of competitors, guess who won? While still in high school, she added singing in nightclubs to her three daily radio programs. After graduation, Patti left home, joined a band, signed with a manager, and was on her way to fame. Her first record deal in 1947, was with Mercury Records and she released five 78 RPM singles that year. Patti gets credit for a historic recording innovation when she recorded additional tracks as her own back-up, "over-dubbing." Her extraordinary vocal range, which spans bass, alto, soprano, tenor and low F made it possible for Patti Page to sing four part harmony with herself! When she recorded "All My Love" in 1949, it sold 700,000 copies.

In 1950 Patti was the opening act for Frankie Laine at New York's Paramount, a huge theatre seating 3,600. She garnered press attention and that led to an appearance on The Ed Sullivan Show (marking the first of 17 appearances over two decades). When she recorded "Boogie Woogie Santa Claus" in October, 1950, the B-side was not expected to be it hit. It was "Tennessee Waltz" and sold 10 million copies, making it the #1 record by any female recording artist. Next came "Mockin' Bird Hill" and fifteen other hit singles in 1951.  In addition to going into the studio to record new singles, Patti Page was performing at least 300 days a year, playing to capacity crowds everywhere.  Somehow she found time to venture into TV as hostess of her own show. "This is My Song," her theme, was written for her show.

The southern silk of Patti's voice, combined with her telegenic high cheek-boned beauty, made her an integral part of the golden age of television as a frequent guest star on the popular musical variety shows of the day.

It was in nightclubs that Patti continued to make her mark and her living. She was a major star performing in all the major venues throughout the country. In New York, she played the Copacabana, the prestigious Empire Room at the Waldorf Astoria and the elegant Persian Room at the Plaza Hotel. In Los Angeles, the marquee at the Coconut Grove frequently read her name, as did the marquee at the Desert Inn in Las Vegas, and the Drake in Chicago. She opened new doors in the 1990s when she entered the era of cabaret, appearing at the Ballroom, Rainbow and Stars (gal pal Rosemary Clooney's home away from home) and the elegant Michael Feinstein's at the Regency-all in New York. These small intimate settings were perfect for Page's personality-warm, inviting and like the clubs themselves. intimate. Her fans are legion, from all walks of life, and included everyday people, show biz professionals and even powerful politicians. President Clinton said of her, "Fans the world over have delighted in the smooth elegance of your voice, your effortless delivery, and the depth of feeling you bring to each song."

Recorded in 1953, "How Much is that Doggie in the Window?" was a massive surprise hit that had originally been recorded as a tune in a children's album. Decades later, Patti updated that tune and recorded a song advocating adopting doggies from shelters. "The Big Record" was her next TV venture, a musical show featuring many top talents and was the first variety show broadcast in color. Patti auditioned for several movie roles before she got her first part in Elmer Gantry and moved to California with her husband and two adopted children.

As musical taste changed with succeeding decades, Patti continued to enjoy enduring popularity as she segued from Pop into Country. Audiences of loyal fans supported her every appearance. A wildly successful tour of Asia broke records. And in 1997, during her 50th anniversary concert in legendary Carnegie Hall, Patti Page was honored as a recording industry phenomenon, having sold 100 million records.

Retirement is not yet a word in Patti's vocabulary. She continues to record and has released three albums on her own label, C.A.F. Records. In 2000, she teamed up with Grammy-winning songwriter/producer Jon Vezner for "Brand New Tennessee Waltz." The project included such admirers and major talents as Emmylou Harris, Kathy Mattea, Trisha Yearwood, Alison Krauss and Suzy Boguss. In 2002, she returned to the studio to record "Child Of Mine" and "Sweet Sounds Of Christmas" The latter, Patti's first holiday album since 1966. Mercury Records also celebrated Patti's career with the release of "The Best of Patti Page: The Millennium Collection." All of these projects are available for purchase on her website at pattipageproducts.com.

Rages, singing or otherwise, usually do not last long, but Patti Page's popularity goes on and on.