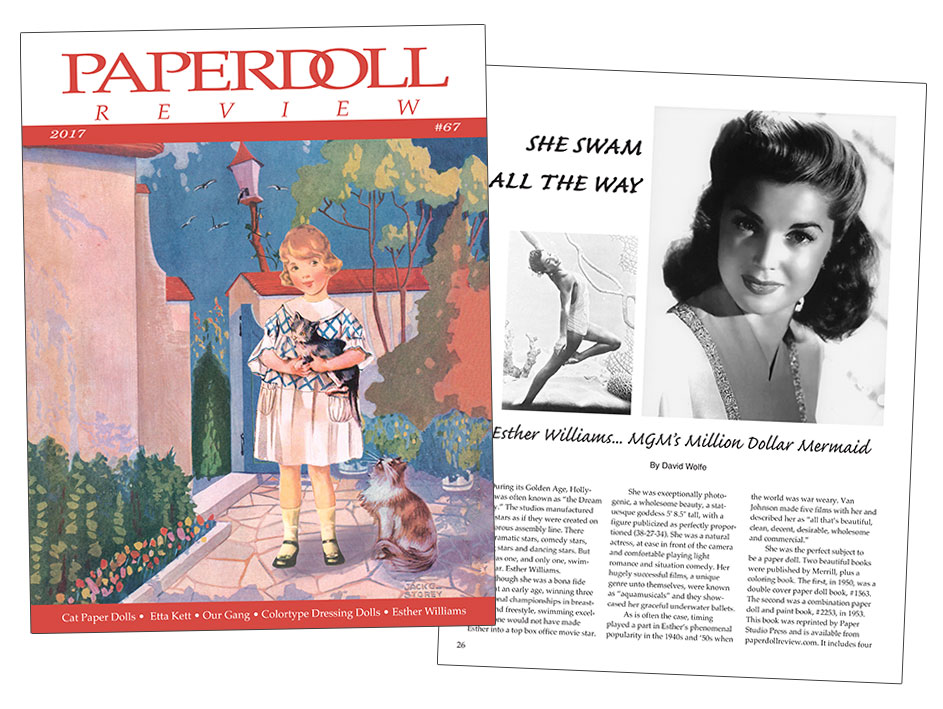 During its Golden Age, Hollywood was often known as “the Dream Factory.” The studios manufactured movie stars as if they were created on a glamorous assembly line. There were dramatic stars, comedy stars, singing stars and dancing stars. But there was one, and only one, swimming star. Esther Williams.

Although she was a bona fide athlete at an early age, winning three US national championships in breaststroke and freestyle, swimming excellence alone would not have made Esther into a top box office movie star.

She was exceptionally photogenic, a wholesome beauty, a statuesque goddess 5' 8.5" tall, with a figure publicized as perfectly proportioned (38-27-34). She was a natural actress, at ease in front of the camera and comfortable playing light romance and situation comedy. Her hugely successful films, a unique genre unto themselves, were known as “aquamusicals” and they showcased her graceful underwater ballets.

As is often the case, timing played a part in Esther’s phenomenal popularity in the 1940s and ‘50s when the world was war weary. Van Johnson made five films with her and described her as “all that’s beautiful, clean, decent, desirable, wholesome and commercial.”

She was the perfect subject to be a paper doll. Two beautiful books were published by Merrill, plus a coloring book. The first, in 1950, was a double cover paper doll book, #1563. The second was a combination paper doll and paint book, #2253, in 1953. This book was reprinted by Paper Studio Press and is available from paperdollreview.com. It includes four pages of originally to-be-colored clothes, painted by Marilyn Henry. Marilyn also did a lovely book that perfectly captures the star’s audience appeal and contains her actual movie wardrobe. This licensed edition is also available from paperdollreview.com. And I painted the paper doll on the back cover of this issue. A gorgeous coloring book of Esther was also published in 1950.

Esther Williams was born in 1921, the youngest of five children. The family was living in Salt Lake City, Utah when her brother Stanton was discovered by actress Marjorie Rambeau who was on tour. The family moved to California to be near the studios for the sake of the lad’s talent. Unfortunately he died at age 16, having only appeared in two silent films. Young Esther’s swimming began when her sister took her to nearby Manhattan Beach. The little girl took a job counting towels to pay for swimming lessons. The lifeguards taught the youngster breaststroke and freestyle, usually considered ‘male only’ sports, at that time.

After graduating from high school in 1939, Esther enrolled in college and to pay tuition got a job at the posh I.Magnin department store where she worked as a stock girl and occasional model. While there, she was asked to audition to replace Eleanor Holm, the star of Billy Rose’s “Aquacade” show, a popular attraction at the Golden Gate International Exposition. Esther was paired with Olympian and Tarzan star, Johnny Weissmuller who repeatedly tried to seduce her, but was rebuffed.

The show brought Esther to the attention of MGM talent scouts who were on the look-out for a female sports star to compete with 20th Century Fox’s skating star, Sonia Henie. Esther had planned to compete in the 1940 Summer Olympics, but they were cancelled because of the outbreak of World War II.

When the show closed, Esther intended to make a career of retailing, but after first refusing to sign a movie contract, she relented. Her 1941 contract had two unusual clauses. She negotiated a guest pass to the Beverly Hills Hotel so she could swim daily. She also insisted on nine months of lessons in singing, dancing, acting and diction. She was an apt pupil. She quickly became a popular pin-up girl because she was usually shot in a swimsuit which was considered to be somewhat provocative in those less explicit times.

Esther’s first screen test (with Clark Gable, no less!) was so successful that she replaced Lana Turner in a film when Lana had eloped with Artie Shaw. But after just a few months of marriage, Lana divorced Shaw and rejoined the cast, ousting Esther who meanwhile, had several bit parts before being cast in Andy Hardy’s Double Life (1942) with a swimming pool sequence added, of course. MGM liked to try out their new discoveries with these Andy Hardy films—even Lana herself started that way.

Next came a “dry” role in A Guy Named Joe (1943) a small part that Esther played with touching sincerity. At last, she was glorified in a Techni-color movie tailored to spotlight her stunning image. Bathing Beauty (1944) was a simple little puff piece aimed at showcasing star Red Skelton, but after seeing her very short and simple swimming sequences, MGM expanded her role and promoted the new star with a six-story sign depicting Esther Williams diving right into Times Square in New York. She made a huge splash and her career blossomed!

MGM recognized the potential of their gorgeous mermaid and the studio’s reputation for producing lavish spectacles moved into high gear. Each of her subsequent string of smash hits presented the star in ever-increasing extravagant presentations that became more and more spectacular. Esther did swimming sequences in Ziegfeld Follies and ‘Til the Clouds Roll By, followed by her starring role in Thrill of a Romance with Van Johnson. It was the 8th highest grossing film of 1945.

She again starred with Johnson in Easy to Wed, also featuring Lucille Ball. Fiesta cast Esther as Ricardo Montalban’s bull-fighting twin sister. Unbelievable as it was, the film was a hit, though there were troubles making it. A crew member died of cholera and several stuntmen were gored by bulls. Esther’s then-husband, football star Ben Gage, accompanied the cast on location in Mexico where he got into a fist-fight and was deported.

On An Island with You (1948) co-starred Peter Lawford as a soldier so smitten that he kidnaps Esther, who is type-cast as a swimming movie star on location in the South Seas. Naturally she looked great in a sarong.

Take Me Out to the Ball Game (1949) is a period picture starring Frank Sinatra and Gene Kelly as ball players for a team owned by Esther. In her autobiography, she described the experience as “pure misery” thanks to her ego-maniacal, disrespecting male co-stars, but her unhappiness never shows in the critically acclaimed musical.

Hit followed hit and although she was sometimes criticized by serious film critics, Esther Williams was a bankable star whose films may today seem more kitsch than seriously cinematic, and yet they are all infinitely enjoyable. Swimming became ballet and only Esther Williams’ grace-in-motion and healthful beauty gave this genre a life unto itself, a unique art form. Certainly, the most visually spectacular aquamusical number ever captured on film was devised by Busby Berkeley who was famous for conceiving and directing ‘30s musicals with hundreds of chorines.

In Million Dollar Mermaid, Esther was surrounded by divers flying from trapezes though clouds of red and yellow smoke while chorines were sliding down sky-high water ramps. In Easy to Love, she led a flotilla of waterskiers and dropped into the water by trapeze.

However, even an athlete as fit and well-trained as Esther can find herself in harm’s way. She nearly drowned several times, suffered ruptured eardrums and broke her neck filming a 115 ft. dive wearing a metal crown. She was in a body cast for seven months.

Esther was wed four times and shared intimate details of her marriages in a best-selling autobiography entitled “Million Dollar Mermaid.” In it she told of her ego-fuelled, domineering third husband, Fernando Lamas, as well as romances with Victor Mature and Jeff Chandler (whom she outed as a cross-dresser). She revealed that most of her leading men needed her help to stay afloat. In Dangerous When Wet (1953), she had no such troubles in dancing underwater with cartoon Jerry, the mouse.

An astute business woman, Esther Williams leveraged her movie fame by lending her name to a swimming pool company, instructional swimming videos for children, a line of swimwear for Cole of California, as well as a service station, a metal products plant, various properties and a successful restaurant chain. Her line of swimwear is still being produced and can be purchased from esther-williams.com, run by her daughter, Susan Gage Beardslee.

Esther Williams died in her sleep, June 6, 2013. Her ashes were scattered in the Pacific Ocean. She has a star on the Hollywood Walk of Fame. Her hand and foot prints are in the forecourt of Grauman’s Chinese Theatre. Her contribution to film history is her own exclusive genre, a musical comedy near and in the turquoise water of a Hollywood pool. Her filmography lists more than 30 movies and they are fearlessly formulaic vehicles. Time magazine described a typical production number…” Cue a fanfare, and Esther is seen at poolside, rising like Aphrodite on a tortoise-shell platform. She doffs her Greek tunic to reveal a sparkling silver one-piece and dives in, alternating freestyle and backstroke, while smiling at the camera.

“Esther presents a water lily to the camera which pulls back to reveal four fountains that spurt spumes at her nearness, then burst into flame as she swims by. At the end, she rises to the surface on a platform, surrounded by the girls and flaming fountains. A fine mist shoots up from a circular track at the edges of the pool, in a watery curtain that closes on the swimmers as if they were onstage in Ziegfeld’s most lavish production number. It’s certainly showbiz magic.”

And Esther Williams is the magical mermaid who takes us into such Technicolor fantasy like no other movie star, ever.