An Article originally published in Spain by S MODA Magazine

The business of paper dolls is revived thanks to collectors and adults that wish to enjoy a second childhood. Three artists design exclusive creations for S MODA.

The paper doll collection that he inherited from his cousin Lois inspired this illustrator to be seduced by the fashion world. Cinema is his great passion and his specialty centers on celebrities of that genre: from Debbie Reynolds to Rizzo from Grease. www.paperdollywood.com

We live in an age where technology monopolizes our existences. In a similar context, what significance does something supposedly passé as paper dolls have? Although it may seem surprising, they persist to exist against the passing of time. In fact, they are living a good commercial moment thanks to the millions of collectors that continue their devotion to the publication of books by the greatest paper doll illustrators of the world who have spent decades creating a parallel universe that enchants you and seems to not easily free you. Far from dying on the vine, the paper doll industry has used the Internet to broaden its horizons and, of course, reach out to old and new customers. A quick look at the Paperdollreview.com website reveals the wide variety of categories that exist in one area where, of course, a good pair of scissors is essential: American girls, brides, Barbie and her world, Disney characters, fairy godmothers, princess and queens, literature, film stars…this is just the beginning of a journey that also takes us to visit the Wild West, the Victorian era or, the political landscape (via the Kennedy family, Reagan or Obama). Along with all these options, several illustrators stand out as authentic idols. Firstly, the grand Tom Tierney, who at 83 years old, is still the King Midas of the cutouts; secondly, David Wolfe, an expert in Hollywood glamour, and third, Eileen Rudisill Miller, number one in terms of romanticism. Alongside them, a new generation of creators has emerged to renew this artistic discipline. Among them, the British Mel Simone Elliott and Thomas Soderberg from New York who shot to fame in 2008 thanks to his Sarah Palin paper doll book.

The paper doll phenomenon as we know it today emerged in the early XIX century in Europe, particularly in London. 1810 brought the creation of the first paper doll called Little Fanny but was not considered as popular as the one that resembled Queen Victoria in 1840. During that time, other paper dolls of the House of Windsor or the German royal family were also very popular. In the USA, the paper doll boom began in 1900 through women’s publications such as Ladies’ Home Journal or Good Housekeeping. In the pages of those popular magazines, appeared paper doll creations inspired by classic ladies of society (accompanied by their boyfriends and their servants) and in the 20’s the most daring flapper girls were created (without boyfriends and without servants but with more dresses and accessories). At the same time, the first silent film stars were made into paper dolls to the delight of fans. Mary Pickford, Lillian Gish, Gloria Swanson, Charlie Chaplin, Rudolph Valentino and the dog Rin Tin Tin were the first to be cut out and dressed. As the twentieth century progressed, the Great Depression contributed to further popularize the paper doll as the economical toy that it was. Until then, girls from both sides of the Atlantic were the main customers for an industry that was already publishing millions. However, during the 40s and 50s, the clientele multiplied thanks to the Hollywood machine and its star system. Alongside them, Barbie helped explode the industry in North America until the late 60s when business began to slow down…and then Tom Tierney appeared.

This illustrator was the first to decide to move beyond movie stars and design paper dolls on personalities such as Jackie Kennedy or Jimmy Carter. By law he could not use their image but after receiving permission to do so, his paper doll books were published successfully. That was not the case with Elvis Presley who was protected by an iron trademark, or religious leaders who remained untouchable. It mattered little. Tierney’s creations grew exponentially through the 80s and the public figures converted into paper dolls books found it an honor to become a part of his published works (provided that these books did not include underwear because the law only allowed the use of swimwear). One of the most special moments for this illustrator was drawing the dresses to be auctioned by the Diana, Princess of Wales (his favorite dress being the one worn to the White House when she danced with John Travolta). His relationship with the British royal family remains intact, having created a paper doll book dedicated to Prince William and Kate Middleton before their wedding. It became an instant sales success.

Along with Tierney, David Wolfe is another essential name in order to better understand the current success of paper dolls. Wolfe arrived into the scene by pure logic. “During the 60s and 70s, I lived I London and worked as a fashion illustrator for newspapers and magazines. It was not until the 80s when I decided to turn my artwork into something that could be cut out.” Cinema was, and still is, his passion, so it is not surprising that it is the main concentration of his work. “One of my childhood memories is the time I discovered Carmen Miranda. I fell in love with her. At the time, my older cousin had a collection of movie star paper dolls. I became fascinated. I think this all led to my work having a vintage feel to it as I pay tribute to the glamor of the Golden Age of Hollywood.” However, Wolfe has a favorite among them. “Without a doubt, Marlene Dietrich. I enjoyed creating this book because her career spanned several decades and recreating the wardrobe was a challenge.” In Wolfe’s studio, there is a large accumulation of book on film history and actor biographies. They help guide him in investigating with detail each of the personalities whose published paper dolls books will be delightedly received by a clientele not exactly young in age. “Most of my fans are middle aged women who want a second childhood through paper dolls and who find in them a good way to relax. There are also many grandmothers who buy for their grandchildren in hopes that they will stop becoming too heavily involved with the use of modern day technological gadgets. And finally, many men buy them who confess that when they were little the liked to play with paper dolls in secret.” Michelle Obama has been Wolfe’s latest best-selling paper doll book. The reason why he chose her? “She is part of today’s world and is elegant. Moreover, being a public figure, Mrs. Obama is not subject to the existing laws regulating one’s privacy.” The fashion chosen for his paper dolls is important and can be curiously comparable to the red carpet dresses of today. “This kind of fashion remains a reference for designers. Regardless, I do not lose sight of today’s trends and I closely follow the work of such designers as Tom Ford, Ralph Rucci, Marc Jacobs or Karl Lagerfeld.”

Though Wolfe is driven by a passion for cinema, other illustrators prefer more classic choices to develop their work. This is the case of Eileen Rudisill Miller. Her favorite stories involve fairies and princesses and nobody overshadows her when it comes to sales. Miller’s beginnings are similar to Wolfe’s. “I studied fashion illustration at the Moore College of Art and worked for years as an illustrator for department stores. I also devoted myself to designing dolls and mannequins. Five years ago I finally decided to do what I always dreamed of which was designing paper dolls.” Fairy tales seem to be an inexhaustible source of inspiration for a paper doll artist who obviously has her own favorite story. Sleeping Beauty. Maybe because I love to sleep! Although it is strange because as a child my first paper doll was Betsy McCall who was the most popular in my country. A normal girl who had nothing to do with fairy tales.” Miller believes it is still too early to exactly define her clientele and to describe it she has a particular method. “To be present at the international paper doll convention celebrated in the United States. It is the perfect place to verify that paper dolls are not only for children.” And with respect to current fashion, Miller confesses to being a faithful follower of magazines and current events. “I loved the lavender that Penelope Cruz wore to the latest Oscar night. Historically, I tend to check the work of Givenchy for Audrey Hepburn, Dior and Elsa Schiaparelli.”

Finally, one must include a third category to this form of creative work: modernity. A prime example of modern paper dolls is the work of Mel Simon Elliott, based in London and graduated from the Royal College of Art in 2007. His company, I Love Mel, produces paper dolls of current icons such as Beyonce, Adele, Kate Moss and David Bowie. “When I was little, I loved to cut and now I tell my clients to put down their iphones and pick up scissors. “ He chose to draw characters aimed to please a new generation. “My favorite icon is Debbie Harry, I love Blondie. And Lady Gaga has done very well because of her clothes…including the meat dress, of course!” At first, Mel thought that only adolescents would buy his creations, but he was wrong. The British thirtysomethings have turned out to be his best customers and his business is booming. “Next is Rihanna. Then I’d like to make paper dolls of Simon & Garfunkel. And something very ‘80s like Magnum P.I., Michael J. Fox and Alexis Colby.”

Eileen Rudisell Miller is an expert in classic princesses and mermaids. She studied to become an illustrator and designed dolls. She has started her own publishing firm, ER Miller, where she creates paper dolls among other things. www.eileenmiller.com 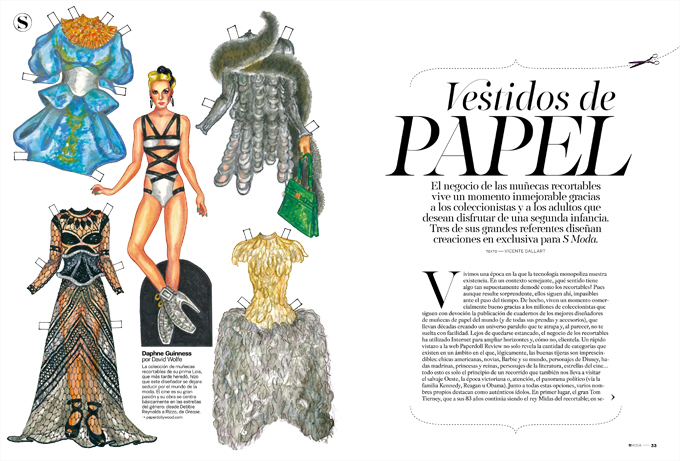 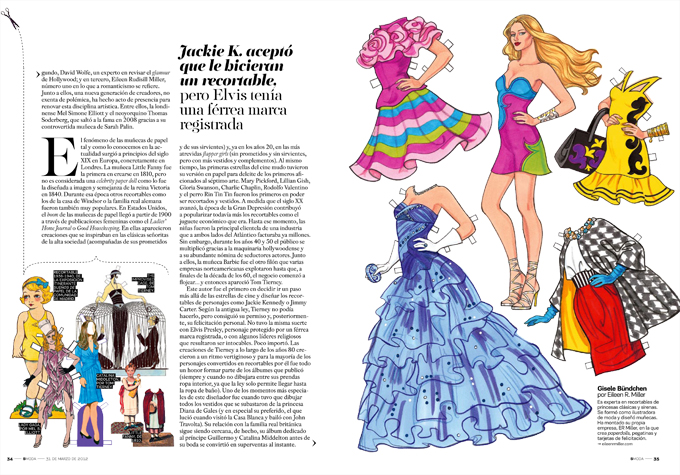 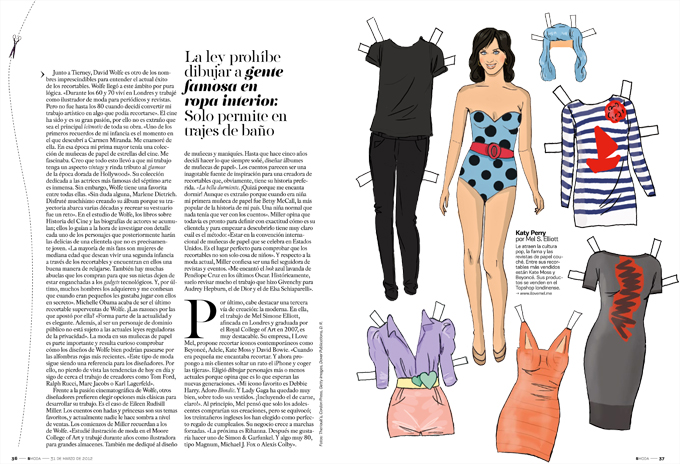