Only Sissies Play with Paper Dolls

Only Sissies Play with Paper Dolls!
A memoir by David Wolfe

“It’s not the way it was…it’s the way it should have been.”  That’s what Walt Disney said in response to criticism that Disneyland’s Main Street USA was not realistic.  My selective memory allows me to remember my childhood the way it should have been.  I remember the good things.  I remember the movies, especially the musicals.  I remember coloring books.  But most of all, I remember paper dolls.  Those beautiful cardboard ladies with their wonderful wardrobes, neatly cut-out and carefully stored in shoeboxes.  We didn’t call them paper dolls then, back in the late 1940s and ‘50s when I was a kid.  Cut-outs.  That’s what they were.  And cut-outs were so important to me.  I loved them.  Why?  Ah, that’s where my selective memory betrays me and I remember what it was like to be a little boy who was different.

A sissie.  A gentle, timid little boy who lived in his imagination.  Frightened and searching for the safe haven that only existed in an illusionary world where everything was beautiful.  My real world was not beautiful.  Northern Ohio, a sprawling suburbia growing so fast after World War II was not the gracious small town idealized in MGM movies.  Our street, not yet paved, was lined with what had once been summer cottages, now converted into year ‘round houses to contain the post-war baby boom families.  Factories had already cannibalized most of the natural landscape along the shores of Lake Erie. 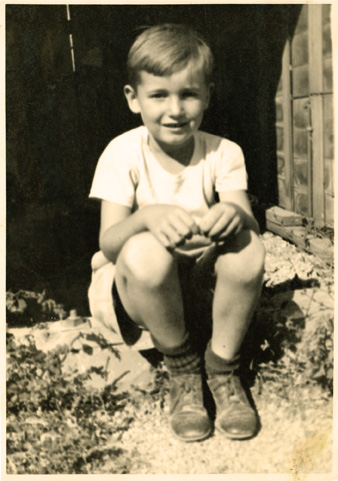 Crowded into our small house, my family was not a happy one.  My father worked the night shift in a factory and slept during the day.  The children, two of us then, had to learn to be quiet, very quiet.  My mother made most of the noise.  Today she would be diagnosed as bi-polar.  That seems obvious when I remember her hysterical highs, her violent temper tantrums and her deep sadness.  How many times did I awaken in the night, stumble into the kitchen for a drink of water and find her sitting forlorn at the kitchen table, silently weeping as she smoked and drank cup after cup of coffee?  Often I’d get my coloring book and crayons and sit with her, each of us coloring a page, not saying a word.

Julie, my mother, encouraged my interests in coloring books and paper dolls. It would be too trite to say that my mother made me a homosexual.  She did not.  But she did nothing to stop me from enjoying the pursuits that were thought to be exclusively for little girls.  I recall waiting anxiously all day for her to return from a shopping excursion in downtown Cleveland.  She had promised me a new book of cut-outs.  I was just four years old but I remember those cut-outs.  They had clothes that were flocked like velvet.  I doubt that I remember much else from my fourth year quite as vividly.

If our house was fraught with dark emotion, my Aunt Mimi’s house seemed more like what movies had taught me a home should be. I felt safe there. It was in the country.  A big house.  Or at least I thought it was big until I returned as an adult.  I loved visiting there every summer for part of my school vacation.  The thing I loved best was playing with the old paper doll sets that had belonged to my cousin, Lois, eight years older than I. I’d dress her paper dolls and stand them up on the stairway, pretending I was Florenz Ziegfeld staging a show.  Lois’ cut-outs were from her own childhood.  Greer Garson.  Bette Davis.  The entire cast of “Ziegfeld Girl.”  Throughout my life, I’ve had a loyalty to those stars.  If only they had known the power paper dolls have over the impressionable mind of a child! I never missed one of their movies.  I still have the same loyalty to the star paper dolls that I collected, too.  Doris Day, Esther Williams, June Allyson.  Turner Classic Movies on TV transport me back to my childhood with every flickering image of those incandescent stars.

My parents argued.  Often they argued about me, about my refusal to play baseball, about my disinclination to hang out with the neighborhood kids.  And they argued about my constant reading, my drawing, and of course, about paper dolls. “Only sissies play with cut-outs!” my father would say with disgust.  My mother always won every battle with an unfair combination of temper and tears.  My father didn’t stand a chance. His son was a sissie.  But he had compensation. My kid sister, Sally, was a rough and tumble tomboy.  She could throw a baseball, score a touchdown and ride her two-wheeler like a hellion.

When I was eight years old, my brother Charles was born. I took being a big brother to heart and taught him everything I knew.  I took him to movies.  I taught him to stay in the lines of coloring books.  And I made paper dolls for him.  Every Christmas, I would stay up late, waiting until he was asleep to work on the paper dolls that were always his favorite present.  He was a fragile, sickly baby who grew surprisingly to be a tubby child and an obese adolescent.  Little Charles was nick-named Poncho after the fat, comic sidekick of a TV cowboy, “The Cisco Kid.” Like me, he found movies and paper dolls the perfect escape from a painful real world.

I remember the Christmas when Poncho was eleven years old.  By that time I was working in the local department store as a fashion illustrator.  But I still spent all my winter evenings making movie star paper dolls for my little brother.  At work I had found a supply of gift boxes in the hosiery department.  They were glossy, glamorous hot pink, lined with shiny black paper.  I swiped twenty-five of them and used them as presentation boxes for the paper dolls I created of his favorite stars like Sandra Dee, Ann Margret and Elizabeth Taylor.  Every Christmas there had to be a new Elizabeth Taylor doll.

Now my memories of paper dolls fast forward.  They travel from Ohio to London and back to Manhattan as my adult life, very much like a soap opera when I think back, sped up.  I married, had children, divorced, came out, enjoyed the extreme ups and downs of a career that I still find compelling.  I remember my return to America after living in Europe for almost twenty years.  I returned to Ohio, to the home of my parents and discovered to my dismay that my collection of paper dolls and coloring books was gone.  Stored in the attic for all those years, they had been destroyed by mildew.  Gone, and with them the memories that I cherished.  Then, just a few years ago, I found out about an auction, the estate of a collector of paper dolls.  I flew to Chicago and began reassembling my childhood collection.

Meanwhile, my family had suffered turmoil.  My brother had grown-up and came out as gay in the liberated ‘70s. Always troubled, alcohol became an overriding problem.  Ultimately he was diagnosed as having a multiple personality and told us he had AIDs.  He decided to cut himself off from any contact with his entire family and moved to San Francisco.

After almost twenty years of estrangement, Poncho, now known as Charlie, came back into my life via a phone call from his therapist who told me he was very ill.  I was happy to be in touch with my little brother again and we had many long and happy conversations.  As we were catching up on each other’s lives, I told him all about my delight in finding the community of collectors and artists.  He was so impressed when I told him I knew Marilyn Henry and Tom Tierney.  Of course, he collected their work.  We giggled together about being elderly men who play with paper dolls.  He made me laugh when he joked, “Oh, I start every single day by asking myself what my paper dolls will want to wear today.”

Poncho told me about two movie star paper doll books that he himself had made.  One was devoted to Ann Margret and he had managed to meet the star and present her with the book.  The other book, as yet unfinished, was going to include every outfit Elizabeth Taylor had ever worn.  He offered to send me the book.  When it arrived I was stunned.  More than a labor of love, it was a magnificent obsession.  Page after page after page.  120 outfits!  Many of them trimmed with jewels, beads, ribbons, feathers and bits of fur.  I called to congratulate him on his accomplishment and promised to take him to the next paper doll convention, telling him that he could display his work in the “artist’s showcase.”  He was thrilled.

My brother will not be at the convention.  Just a few weeks after renewing our relationship, he fell down the steps in his apartment, suffered massive brain damage and died.

I intend to take my brother’s paper doll book to the convention, to share this little piece of his life that truly was the way it should have been…perfectly beautiful.

Addendum: I did take Poncho’s book to the convention and displayed it there.  It received a great deal of appreciative attention and was recognized with a blue ribbon prize in its category as well as being voted the most popular paper doll in the entire convention.  I was proud of him and very touched to accept the ribbon on his behalf.