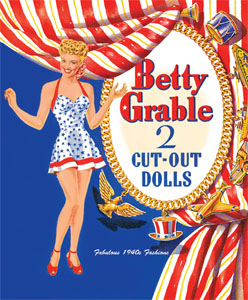 Chosen by “Life” magazine as one of “The 100 Photos That Changed the World,” the 1943 pin-up picture of Betty Grable is an iconic 20th Century image. She wears a modest white swimsuit, high heeled shoes and she peeks coyly over one shoulder, her corn-colored hair piled high in an upsweep. It was taken when the star was at her peak as the singing, dancing dreamgirl of musical movies. The photo became the favorite with wartime G.I.s. Betty Grable was the perfect image of the American ideal, a sweetly sexy beauty with a down-to-earth attitude beneath her high gloss glamour.

Born Elizabeth Ruth Grable in 1916, the third of nine children, talented little Betty was taken to Hollywood by her mother and when she was only 13 years old, she appeared as a chorus girl in her first movie. When it was discovered she was underage, she was fired, but that didn’t delay her career for long. By 1936, she had appeared in a score of shorts and movies, notably a small part in “Follow the Fleet,” starring Fred Astaire and Ginger Rogers. Stardom eluded Betty who was wed for a time to former child star Jackie Coogan and she left Hollywood for Broadway. In 1939, she gained attention in an Ethel Merman hit show, “DuBarry Was A Lady” and was soon on her way back to 20th Century Fox in Hollywood.

The world went to war and there was a demand for a movie queen who wasn’t sophisticated and mysterious like Garbo or Dietrich. Betty Grable’s blonde, blue-eyed beauty, half-goddess and half-waitress, captivated audiences who delighted in her spirited dancing, pleasant singing and light comedic talent. “Down Argentine Way,” in 1940, showcased her in glorious Technicolor. Her career moved into high gear and didn’t slow down for the next two decades. Her popularity was her only problem because the studio worked her non-stop, often to the point of exhaustion. She chalked up appearances in almost one hundred shorts and movies over the years! By the end of the decade she was the highest paid movie star in the world.

Betty Grable made twenty-five major hit musicals in thirteen years, including “Tin Pan Alley,” “Moon Over Miami,” “Song of the Islands,” and “Springtime in the Rockies.” Nostalgia for the turn of the century during the war years is evident in many of Betty’s movies such as“The Dolly Sisters,” “Coney Island” “Mother Wore Tights”and “Diamond Horseshoe.” 1944’s “Pin-Up Girl” cashed-in on Betty’s popularity with G.I.s. Her legs were deemed to be perfect and so valuable to her studio that they were insured with Lloyd’s of London for one million dollars (each!).

Betty Grable was never given the opportunity to play opposite legendary leading men like Clark Gable or Gary Cooper. Her name alone was enough to guarantee box office success and indeed, she was one of Hollywood’s top ten draws for ten years. Dan Dailey, an amiable if not dynamic performer, was Betty’s co-star in many of her 1950’s hits. Her twenty-two year long second marriage to bandleader Harry James gave her two children. “How to Marry a Millionaire” in 1953 was her last movie and she was teamed with Marilyn Monroe who was obviously destined to replace Betty Grable as a new generation’s beautiful blonde. For the next twenty years live performances in Las Vegas, Broadway and London plus guest shots on TV kept Betty Grable in the public eye until her death in 1973.

Her warmth and personal charm made Betty Grable seem more like the pretty girl next door than a glamorous Hollywood legend. Young fans adored her and she was a likely subject for paper dolls and coloring books. This book, originally published in 19?? portrays Betty Grable at the time she was poised to become the world’s most popular pin-up girl, an enduring icon of American beauty.