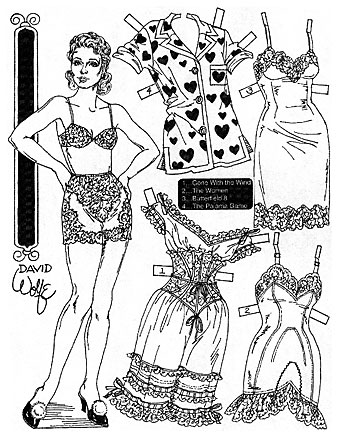 The fantasy factory known as Hollywood has always offered fashion as an important element of movie magic. That was never more true than in the glory days of the past. What the stars wore was the stuff of dreams. Extravagant evening gowns and chic daytime outfits were just part of the wardrobes designed to dress the characters in films where every facet of life, every occasion, every moment demands an eye-catching creation. The lingerie and loungewear that is part of a real woman's private life became a very public matter on the silver screen. Paper dolls of the past, especially movie stars, boasted extensive wardrobes and almost every book published contained lovely boudoir styles.

When movie characters disrobe these days, sometimes they don't stop until they are absolutely naked. That was not the case in the past. When the stars of Hollywood's Golden Age "slipped into something more comfortable" they also slipped into something spectacular. Lacy lingerie, exotic pajamas, a sexy nightgown or elegant negligee. When a star undressed, she was still dressed-up in creations by legendary designers like Adrian, Orry-Kelly, Travis Banton, Helen Rose and Edith Head.

Before the Hays Code introduced self-censorship to movies in the '30s, there was very often a scene in which comely beauties could be seen in rather naughty intimate apparel. Underwear in the movies was always exquisite and delicate, dainty little lingerie of the finest silks and satins, trimmed with the loveliest of laces and ribbons. Early in her career, before she became a singing Valentine, Jeanette MacDonald was known as the "Queen of Lingerie" because every one of her films like "Love Me Tonight" (1932) found her posed coyly in her undies. Joan Crawford's acting lacked finesse in "Our Blushing Brides" (1930) but one critic gave her lingerie a rave review when he gushed about her "lace step-ins". Busby Berkeley's bevy of beautiful chorus girls often found themselves involved in those amazing formations while wearing very, very little.

Form follows fashion and the fashionable body shape changes as style evolves. The natural, soft figures of the '30s shifted towards a more restricted silhouette and sexy lingerie was replaced by heavily structured girdles. Obviously, such foundation garments lacked glamour and stars seldom stripped down to reveal their curves rigidly encased in taut elastic, rubber, snaps and straps. However, in "The Women" (1939) there is a scene in a fitting room where a model swishes around wearing a torturous looking contraption while she croons, "Our new one-piece lace foundation garment, zips up the back, no bones."

One body-shaping undergarment has appeared over and over again in movies. Antique corsets are regarded as very alluring and rightly so. In fact, even today they are often transformed into high fashion as well as regarded as a fetish in some circles. Any woman who subjects herself to the agony of a tightly laced corset attains an amazingly voluptuous hourglass shape. Virtually every period film seems to include a scene in the heroine's boudoir where she is revealed in a corset. Judy Garland in "Meet Me in St. Louis" (1945), Greer Garson in "Pride and Prejudice" (1940) and Elizabeth Taylor in "Raintree County" (1957) are just some of the long list of big stars who wore corsets on the screen. When Mammy laced Scarlett into her corset in "Gone With the Wind," (1939) audiences believed her eighteen inch waist was fact. Not so. Dr. Valerie Steele, curator of the Fashion Institute of Technology Costume Museum, and an authority on corsetry, says that antique corsets truly could be laced into miniscule waistlines indeed, but women in the past never really tightened them to that degree.

More modern underwear is less romantic and usually employed to set a torrid mood on screen. Elizabeth Taylor wore form fitting slips lavishly trimmed with lace in two of her films, "Cat on a Hot Tin Roof" (1958) and "Butterfield 8" (1960). Even wholesome Doris Day was seen in a pale blue slip in "Pillow Talk" (1959) before she slipped on a matching duster robe. 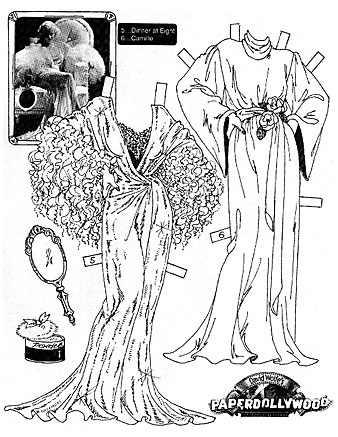 Brassieres were an important item in the '50s when fashion became staggeringly top heavy. But they were seldom revealed on the screen. Legend has it that Howard Hughes designed a cantilevered bra for his overly endowed discovery, Jane Russell. Janet Leigh's impressive curves were contained in sexy brassieres in "Psycho" (1960) before she stepped into that scary shower. When Ann Bancroft seduced Dustin Hoffman in "The Graduate" (1967) she undressed to reveal a black bra, half-slip, stockings and garters. By the time Madonna made her screen debut in 1985's "Desperately Seeking Susan," her penchant for wearing a bra as an everyday top became a commonplace fashion for young women.

Sleepwear and loungewear have also had their fair share of screen time. When movie stars went to bed, they wore curve-conscious nightgowns of clingy satin and peek-a-boo lace or filmy chiffon. In "The Women," Joan Fontaine admires a model wearing a lovely nightgown and exclaims, "I'd be glad to wear it as an evening gown." A wartime pin-up of Rita Hayworth in a cream nightgown trimmed with black lace was deemed so provocative that it was pasted onto the first atomic bomb. Rita reprised her nightgowned image years later when, still gorgeous, she sang "Bewitched, Bothered and Bewildered" in "Pal Joey" (1957). A sheer negligee and satin nightgown is donned by Grace Kelly in "Rear Window" (1954) to demonstrate to James Stewart what he's missing by not proposing marriage to her. When Garbo expired in Robert Taylor's arms in "Camille" (1936) her languid long sleeved nightgown was "to die for." Unquestionably the most glamorous boudoir get-ups were the beaded, feathered, fantastic gowns and robes Adrian dreamed-up for Jean Harlow in "Dinner at 8"(1936). A maribou-trimmed chiffon negligee even made a comic appearance in "Bringing Up Baby" (1938) when it was worn by Cary Grant.

Sometimes designers turned the tables on glamour and put stars into men's pajamas. Claudette Colbert borrowed Clark Gable's pajamas in "It Happened One Night" (1934) but Doris Day donned only the top half of John Raitt's pjs in "The Pajama Game" (1957)

Disrobing is a sexist exercise in the movies. Male stars were almost never exposed in their underwear. One notable exception is Tom Cruise's tightie-whitie karaoke number in "Risky Business" (1983).

Hollywood, like fashion itself, is a reflection of society and today's lifestyle, driven by comfort and convenience, just doesn't require a wardrobe that includes extravagant underpinnings (except for an occasional fling at Victoria's Secret). Too bad couch potato loungewear has replaced those feathered fantasies of the past. How wonderful that movies remain an enduring record of what it once was like when Hollywood undressed. And any paper doll collector can usually find the lovely intimate apparel of the past well represented in vintage books and the reprints published by Paper Studio Press.