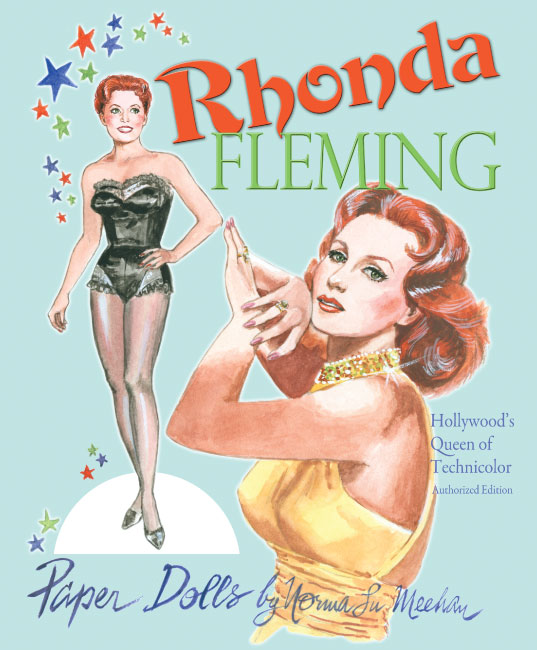 One of the screen’s loveliest beauties, Rhonda Fleming’s real life role as an important philanthropist is more meaningful to the star than her very successful screen career. She calls her stardom a Cinderella story and indeed, it seems to be. But Rhonda’s natural talents and her breathtaking beauty were gifts from God, not a Fairy Godmother.

Rhonda Fleming’s screen name was chosen for her. She was born Marilyn Louis in 1923, in Los Angeles and went to school in Beverly Hills. A raving beauty, even as a teenager, she was spotted by an agent and without so much as a screen test, quickly given her first movie roles. Untrained as an actress, Rhonda was cast as a very disturbed mental patient in Alfred Hitchcock’s Spellbound, playing her first big dramatic scene with Ingrid Bergman.

After such an auspicious start, Rhonda Fleming’s career took many twists and turns that led her to stardom in a wider variety of film genres than most major movie stars who often suffer from type casting. Her films include some film noir classics, several great Westerns, frothy comedies and a few musicals (too few, as she has a beautiful voice). She appeared in more than 40 films, mostly in the ’40s and ’50s, usually playing strong, independent, feisty and sometimes downright evil women. Rhonda has said that producers always seemed to see her as a woman who is nothing like her real self.

In 1945’s Spellbound, Rhonda played a nymphomaniac, then a duplicitous secretary who frames Robert Mitchum for murder in Out of the Past (1947). She sang as Bing Crosby’s leading lady in A Connecticut Yankee in King’s Arthur’s Court (1949). It was her first Technicolor movie and thereafter her exquisite coloring, that flaming auburn hair and those emerald eyes, crowned her as “The Queen of Technicolor” (a moniker she doesn’t much care for). She next traded quips with Bob Hope in The Great Lover (1949). Her career moved into high gear and Rhonda Fleming starred in scores of films, mostly noir dramas and adventure-themed B-films where she was usually cast as a high spirited heroine. A rancher, a lady-pirate, a femme fatale, the owner of a banana plantation, a harem girl. She was rather oddly cast as Little Egypt, (the famous belly dancer) and the most famous Egyptian of them all, Cleopatra, in Serpent of the Nile (1953). Rhonda remembers how the famed serpent was so fond of her cleavage that it wriggled down the front of her low-cut gown!

The 1950s craze for 3-D movie put the beautiful star into a whole new dimension when she starred in Inferno, Jivaro and Those Redheads from Seattle. Another dimension was added when Rhonda appeared live in Las Vegas at the Tropicana. Her musical talent allowed her to appear on the Los Angeles stage in Kismet, to tour with The Boyfriend, to sing in a 10-city concert tour featuring the music of George Gershwin as well as a one-woman concert of Irving Berlin’s music at The Hollywood Bowl. She also played in a star-studded revival of The Women on Broadway.

Rhonda Fleming the star accomplished so much, but it is as an important philanthropist that she is making even more significant achievements. In 1988 she was the founding member of STOP CANCER. She is an Ambassador of Childhelp USA, ARCS, a Life Associate of Pepperdine University, a Member of Freedoms Foundation of Valley Forge, a Founder of the French Foundation for Alzheimer Research, and a Benefactor of the Los Angeles Music Center. She is on the Advisory Board of Olive Crest Treatment for Abused Children. She also established the Rhonda Fleming Family Center at P.A.T.H. (People Assisting the Homeless). Among so many other charitable organizations, she established the Rhonda Fleming Mann Clinic for Women’s Comprehensive Care and Resource Center at the UCLA Medical Center.

In private life, Rhonda was married to Ted Mann until his death in 2001 and she is now wed to Darol W. Carlson. She has a son, Kent Lane, two granddaughters and four great-grandchildren.

Rhonda Fleming ... a great beauty, a talented star and a woman who cares.